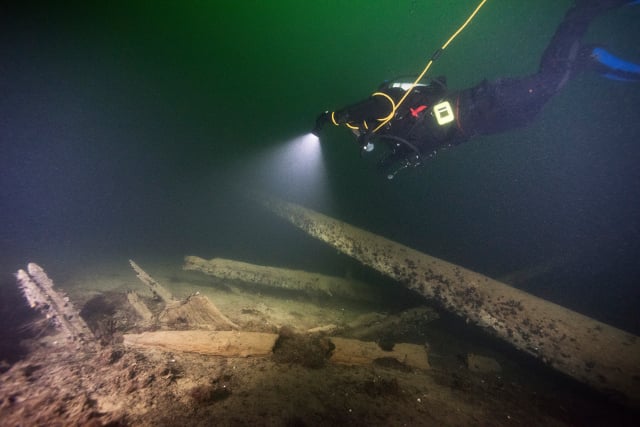 Maritime archaeologists made the discoveries just before Christmas while diving in the archipelago to take pictures and gather material for the planned museum, a spokesperson for the Swedish National Maritime Museums told The Local.

Historic vessels are a fascinating, but not unusual, discovery in the Baltic Sea's shipwreck graveyard (there are at least 100 intact ships on the Baltic seabed). The water is too brackish for shipworm, which means that a huge number of wooden ships have survived on the bottom of the sea with almost intact hulls for centuries.

Most shipwrecks found in Stockholm are from the 17th and 18th centuries, Sweden's maritime heyday, but one of the new finds is thought to be from the 14th or 15th century. Mostly submerged in the mud on the seabed, the wrecked ship – believed to be a cog – is 23-25 metres long and seven metres wide.

“My pulse went up when I realized what we were looking at – I have never seen such well-preserved shipwrecks,” said maritime archaeologist Jim Hansson in a statement.

Onboard the other shipwreck, estimated to be from the 16th century, a whopping 20 barrels of osmond iron, kitchen utensils and tools were found. The National Maritime Museums said the extent of the iron found was “unprecedented in previous maritime findings”. The exact location of the wrecks has not been revealed.

The planned maritime archaeological museum 'Treasures of the Baltic Sea' is scheduled to open in 2020 next to the Vasa Museum on Djurgården island in Stockholm. But it is unlikely that any new wrecks found will be turned into a new version of world-famous warship Vasa, which sank in 1628 and was salvaged in 1961.

“There will be both authentic exhibits in the new museum such as objects found and parts of wrecks. But no whole wrecks like the Vasa ship, because the wrecks are best preserved by staying where they are now,” Cecilia Eriksson, communication officer of the Swedish National Maritime Museums, explained to The Local.

“Instead, visitors will get to join dives deep into the secrets of the Baltic Sea with the help of digital technology,” she said.

IN PICTURES: Artist's impressions of the new museum