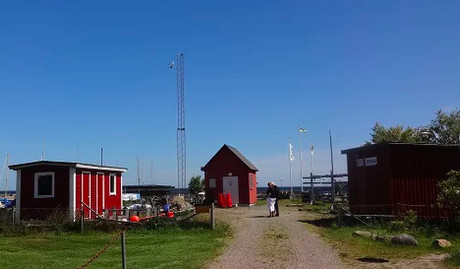 The weather mast was erected last summer. Photo: Sydkustsol
Per-Olof Olsson, from Abbekås, claims that his region comes in last in the 'Solligan' or 'Sunshine League' contest held by Swedish broadcaster SVT because a measuring station in the city of Lund is used as the benchmark.
“The thing is that for Skåne, they measure the sun in Lund, and in Lund there isn't really that much sun,” he told The Local. “But it's not true. We have a lot more sun on the South Coast.”
His organization, Sydkustsol or South Coast Sun, plans to spend 250,000 kronor ($30,000) buying identical weather measuring equipment to that used by the Swedish Meteorological and Hydrological Institute (SMHI), Sweden's official government weather forecaster.
“It's the same equipment that SMHI uses, so we're doing a proper job, and all the data will be treated in their system, so they can use it in their reports,” Olsson said.
They are working with Mats Andersson, a local meteorologist, to develop a methodology, and to help install the equipment in the fishing village, which has a population of 729 people.
“This is the league that we will win!” the group's website declares, next to a link to the Solligan page on SVT's website.
Olsson admitted, however, that he and his partners had yet to convince SVT to allow them to join the contest.
“We haven't managed to do a deal with them yet, but what we want is for SMHI to use our data,” he said.
READ ALSO:
Olsson said he had been mulling plans for a rival station since not long after SVT launched the annual Solligan in 1990, after finding himself increasingly affronted that his region, with its sun-drenched fields of bright yellow rape, was being depicted as cloudy and overcast.
The decision to launch Sydkustsol, he said, was partly motivated by the pride he and his four partners feel in their Skåne heritage.
“I'm an absolute Skåning,” he said. “My ancestors here go back to 1500. And we are a bit patriotic here, so you could say it's a patriotic project.”
Olsson, a local entrepreneur, runs Lillehem Gårdshotel, a four-room B'n'b in the village of Skivarp, just outside Abbekås, and also helps arrange concerts for his son's country dance band.
The partners erected a weather mast by the harbour in the village last summer, and hope to fit it with working equipment in the coming year.