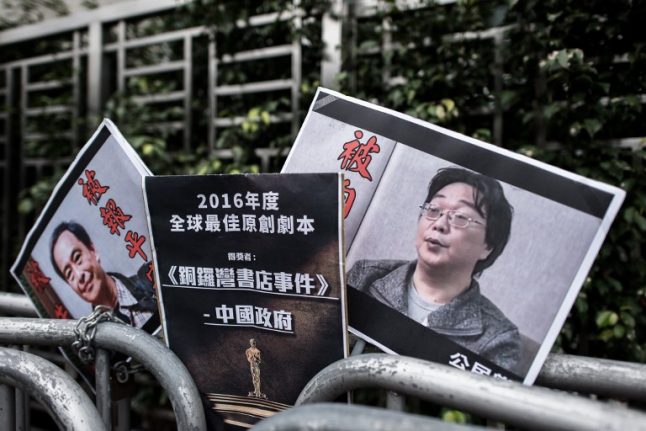 Placards showing missing bookseller Gui Minhai (R) and his associate Lee Bo (L) outside the China liaison office in Hong Kong in January. Photo: Philippe Lopez/AFP
It was unclear whether the Chinese-born Gui's statement was made under duress, but video of his confession shows him flanked by two police officers and a close friend said the remarks were “not to be believed.”
The Chinese-born Gui, 53, was arrested on a train to Beijing last month while travelling with two Swedish diplomats — the second time he has vanished into Chinese custody in murky circumstances.
Sweden, the European Union and the United States have called for Gui's release, with Swedish Foreign Minister Margot Wallstrom on Monday calling his seizure “brutal”.
But Gui accused Sweden of “sensationalising” his case.
“I have stated that I do not want Sweden to continue to sensationalise what has happened to me. But obviously, Sweden has not stopped doing so,” he said in the video. “I felt that it was necessary for me to come out and say something.”
The video emerged from an “interview” set up on Friday with handpicked Chinese media, according to their reports.
Gui was travelling by train to Beijing from the eastern China city of Ningbo, where doctors had said he may have the neurological disease ALS. He was to see a Swedish specialist in the capital but was arrested aboard the train.
Gui said on Friday that Swedish officials had pressured him to leave China despite being barred from doing so due to pending legal cases.
“I have declined a few times. But because they were instigating me non-stop, I fell for it,” said Gui. “Looking back, I might have become Sweden's chess piece. I broke the law again under their instigation. My wonderful life has been ruined and I would never trust the Swedish ever again.”
Gui was one of five Hong Kong-based booksellers known for publishing gossipy titles about Chinese political leaders who disappeared in 2015 and resurfaced in mainland China. Gui was on holiday in Thailand at the time.
He eventually re-emerged at an undisclosed Chinese location, confessing to involvement in a fatal traffic accident and smuggling illegal books into mainland China.
'Shocked and sad'
China has given scant details on his arrest but acknowledged on Tuesday that Gui was in custody under criminal law, without offering further specifics.
Chinese criminal suspects often appear in videotaped “confessions” that rights groups say sometimes bear the hallmarks of official arm-twisting.
Gui's family members could not immediately be reached for comment. But dissident poet Bei Ling, a friend of Gui's, said there was “no doubt” that the publisher wanted to seek medical treatment overseas.
“I'm very shocked and very sad. It's difficult to listen to him say these things,” Bei told AFP. “I believe his statements, made under circumstances without freedom… (are) not to be believed.”
“How can we believe whether the words of someone who is oppressed — like a prisoner — are real?” he said, adding that Gui looked “unwell”.
Gui's relatives have previously expressed fears that he will receive a lengthy prison sentence, jeopardising his health.
But on Friday, Gui said no doctors had diagnosed him with ALS, adding, “I think Sweden has exaggerated this and manipulated (me).”
“I have seen through the Swedish government. If they continue to create troubles, I may consider giving up my Swedish citizenship,” he said.
By AFP's Dan Martin