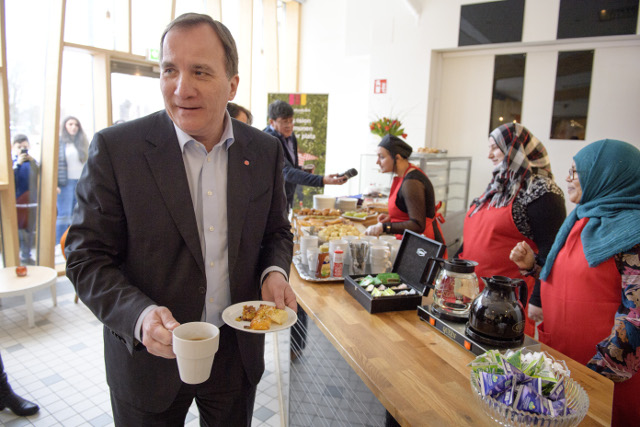 Even the Prime Minister gets Fika. Photo: Jessica Gow/TT

The origins of the word “fika” aren't certain, but one theory is that it's a consequence of Swedish slang from the early 1900s, where the letters of words were muddled up to create new terms. “Kaffi”, a slang term for coffee at the time, had its letters jumbled up and “fika” was the creation, or so the story goes.

Social coffee drinking was around in Sweden long before that term was even created, but it was in the 1900s when the idea spread to the working class agricultural workers that the modern day fika break started to become prevalent.

“Fika breaks at work are ingrained in Swedish culture. In agricultural times there was 'elvakaffe' – 11 o'clock coffee – so the concept of a fika or coffee break at work has been established for at least 100 years. It's no new phenomenon,” Annika Härenstam, professor emeritus in sociology and work science at Gothenburg University tells The Local.

“It was an important part of Swedish traditional farming culture and has stuck around since then – taking a break and talking for a few minutes. Nowadays Swedes drink more coffee than many other countries.”

In the latter half of the 1900s the concept of a fika break at work grew to be so important that many workplaces started to have two fika breaks a day – one before lunch and one in the afternoon, and so the coffee break became an intrinsic part of Swedish working culture.

“The fika break is well established at most Swedish workplaces. There's no law that says that the employer should arrange for, or at least be in favour of the fika break. But it's a common rule,” says Linköping-based researcher Viveka Adelswärd, who has studied the fika phenomenon. Sweden's fika break has gained international fame in recent years, but what's the story behind it? Photo: Henrik Holmberg/TT

Apart from the chance to take in some caffeine and a snack, Sweden's fika breaks serve a useful purpose in creating an informal connection between workers, and that daily informal break to do little more than chat is more important than it seems, Adelswärd argues:

“I believe that short, regulated social contact and small talk can be more important than people imagine. Face-to-face conversation is the fundamental form of human communication. We read one another, feel that we belong through it, and also develop empathy. MIT's Serry Turkle has warned about the dangers of replacing face-to-face conversations with social media for example.”

According to Gothenburg University's Härenstam however, the replacement of the fika break with other distractions has already started to happen in some quarters, and they are no longer as ubiquitous as international portrayals of break-filled Swedish working days make them out to be.

“It's changing, and is either starting on the road towards disappearing or is at least reducing significantly thanks to the more individualized working culture in some industries. Some modern offices and industries are also more inclined towards having an automatic coffee machine where you just go and take your individual cup of coffee then go back to your desk,” she explains.

READ ALSO: Why Sweden is a long way from six-hour work days

Nowadays the uptake of the traditional two fika breaks per working day is certainly not universal: in mostly rural northern Sweden (51 percent) and rural southern Sweden (42 percent) it is far more common to have two a day than in or around Gothenburg (35 percent), Malmö (30 percent) and Stockholm (17 percent), according to one of the few surveys on the matter.

That may not be a good thing for workplace productivity. Studies have shown that people who work in an environment with several shared fika breaks work more effectively – and perhaps unsurprisingly, they also consider the mood at their place of employment to be better.

“It's also a place where many small problems are solved – information is shared, questions can be asked if you're new for example. It's a way of breaking into the workplace culture, getting informed about what's happening. It's quite common to talk about work during the fika break – while on the other hand of course there are those who think you shouldn't,” sociology professor Härenstam notes.

“Workplaces that are committed to creating a positive environment still make it a requirement to have a shared coffee break here and there. It can be as simple as a few people standing around the coffee brewer and having a cup and a chat. Many offices I've visited still say 'right, it's time for fika', and everyone stops what they're doing.” All Swedes may not get two a day at work these days, and there are certainly challenges competing for the attention of workers, but Swedophiles planning a move on the back of regular buns and coffee may be relieved to know that Härenstam's ultimate conclusion is that the fika break is still alive and well, at least for the time being.

“With the amount of pressure increasing, and automatic coffee machines becoming more common, there area growing number of people who don't do it. There's also competition with social media – people grab their coffee from the machine and maybe google something rather than chatting with their colleagues – so there are new things that compete with the fika break. But it's still alive. It has changed but it hasn't disappeared. It's still well established, it's still part of culture.”

READ ALSO: All The Local's articles about Sweden's fika tradition