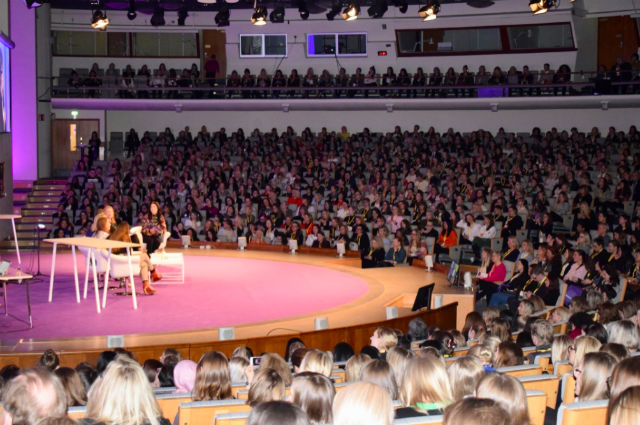 It’s a question asked by the organisers of Women in Tech, an event held annually in Stockholm on March 8th which is, by no coincidence, International Women’s Day.

In Sweden, Sjöberg explains, just 30 percent of tech roles are filled by women.

Determined to do something about this dismal statistic (often blamed on a 'pipeline problem'), some of Sweden’s largest media and technology companies, including MTG, have banded together to address the issue.

“Such a large part of the population can’t be outside recruitment,” she says.

“So that’s why we need to do different activities to put the spotlight on the industry and show women why it’s suited to them.”

Since the first Women in Tech event in 2014, the concept has gained momentum and is making progress with its mission to inspire and enlighten women in the industry, as well as those curious about tech.

The all-day event kicked off with a light breakfast before an introduction to moderators Sabinije von Gaffke, founder of The Game Change Global Initiative, and Anna Olin Kardell, journalist and program leader.

Taking first to the stage was Joy Buolamwini, self-proclaimed ‘poet of code’ and founder of the Algorithmic Justice League. Joy’s inspirational research explores the intersection of social impact technology and inclusion.

Speakers following Joy included TV personality and neuroscientist Mouna Esmaeilzadeh, a pioneer in the field of preventative healthcare, and KTH’s Danica Kragic on the future of robotics.

A notable speech was delivered by the Mayor of Stockholm Karin Wanngård, who introduced ‘Stockholm: A Woman’s Place’, a new initiative between The Local and Invest Stockholm. Wanngård received an enthusiastic round of applause when she declared Stockholm a place where women are free to reach their personal and professional potential.

Mayor of Stockholm Karin Wanngård introducing the launch of 'Stockholm: A Woman's Place'

The afternoon was filled with a series of breakout sessions when attendees could choose to hear more about topics like AI, digital leadership, startup life, and blockchain. More speakers followed in the auditorium before attendees were invited to unwind and mingle with a drink in hand.

What stands out most about Women in Tech 2018 is the obvious need for an event of its kind. Tickets sold out in a record two minutes, and there was barely a free seat in the packed auditorium.

Perhaps the event's success is, in some part, due to the location in which it is organised and held.

“There are many perfect places for an event like this, but as everyone knows Stockholm is a hub for many tech companies and we have a lot of people working in the industry,” says Sjöberg.

She adds that, while the event is usually a one-off, this year there will be a string of related events running throughout the year.

“This year, all 11 sponsors will host an event on their own premises, so there will be more activities that will keep the discussion going and keep the spotlight on the issue.”