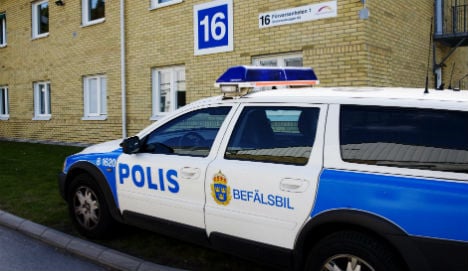 A police car arrives at Sagåsen after a previous escape in 2009. Photo: Erik Abel/TT
At midnight on Thursday, staff at the Sagåsen detention facililty in Kållered discovered a broken window in a computer room at the centre.
When they then counted the 65 residents, they found that 14, about ten of whom where Afghan, were missing.
“We are taking what has happened with the utmost seriousness,” Torbjörn Nyberg, who leads the detention department at the Swedish Migration Agency.  “Over the day, we will be taking the necessary steps to secure the premises in Gothenburg and continue our work to improve security at our detention centres.”
Mikael Holmgren, who leads the Swedish Border Police in the region, said that his team had so far failed to track down the escapees.
“The police have been out and looked for them without being able to catch them,” he told Sweden's SVT broadcaster.
He said it was “obviously particularly stupid” that it had been so easy for them to escape through a window.
“I mean, the whole reason that they’re sitting in detention is that they don’t want to leave the country voluntarily,” he said.
One of the remaining 51 detainees at the centre told the crowdfunded news site Blankspot, which broke the story, that many more of the centre's residents could have gone.
“Everyone had the possibility but most of the people here wouldn’t know what to do as fugitives,” the person explained.
Last week, six people were deported from the centre to Afghanistan, despite a hunger protest mounted by 30 Afghan detainees.