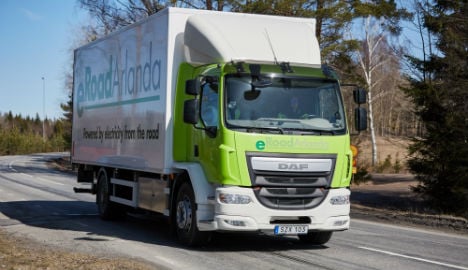 The truck is the first fully electrified lorry to be approved for operation on a public road in Sweden. Photo: NCC/Joakim Kröger
The 2km stretch outside Sweden's Arlanda Airport was inaugurated on Wednesday in a ceremony attended by Sweden's infrastructure minister Tomas Eneroth and Lena Erixon, Director General of the Swedish Transport Administration.
An electric truck working for the logistics company PostNord will over the next 12 months use the road to stay charged as it shuttles deliveries between Arlanda Airport and its distribution centre 12km away.
The truck has been fitted with a connector underneath its chassis which attaches to an electrified groove in the road, drawing power like a car on a Scaletrix track.
“Everything is 100 percent automatic, based on the connector magnetically sensing the road,” Hans Säll, Chief Executive of the eRoadArlanda Consortium, told The Local. “As a driver you drive as usual, the connector goes down onto the track automatically and if you leave the track, it goes up automatically.”
He said that in a commercial application, it would be easy to handle billing and permissions.
“You can send data through electric cables, so it's no problem to identify the car, and the rail will know if you are allowed to draw electricity or not and it will be able to charge you.”
The technology has been developed by Gunnar Asplund, who set up his company Elways in 2009 after a long career with the Swedish engineering company ABB.
“It's just a good idea,” Asplund told The Local. “Studies in both Germany and Sweden have shown that there's an enormous difference in cost between having cars with big batteries, and cars with small batteries and electric roads.”
But he said that setting up a national system would require investment in infrastructure.
“Our calculation is that around 20,000 km of road needs to be electrified.” he said. “Then you would have a grid with about 40km between the big roads that are electrified, so you can operate 40km by 40km with a battery, and then you can go out onto the electrified road if you travel longer distances.”
The eRoadArlanda solution is one of two 2km pilot projects funded by the Swedish Road and Transport Agency.
In 2016, a strip of the E16 motorway outside Gävle was fitted with overhead cables developed by the German engineering giant Siemens, which have been used to recharge a hybrid truck supplied by Scania.
“That solution can only handle heavy traffic, and our ambition is to cover both heavy and light traffic,” Asplund told The Local.
Säll said he thought electrified roads could be in commercial use quite soon.
“I think that this or a similar technology will be in commercial use within five to ten years,” he said. “Every government that wants to have a fossil-fuel free transport system has to do something, and it's really difficult to see how you can do something without electric roads.”
The Swedish Road and Transport Agency's National Plan for Electric Roads, published last November, envisages starting by electrifying the 1,365km triangle linking Stockholm, Malmö and Gothenburg which is responsible for 70 percent of heavy goods traffic in the country.
But first, the Agency is planning a longer pilot project of between 20km and 30km, which will be installed in about two to three years.
The energy is delivered from eRoadArlanda at 200kW, ten times what would be delivered by a standard stationary charger.
“You have to imagine you have several 18 tonne trucks. You need to have power enough,” Asplund explained.
But Säll stressed said that despite this, the safety risk is minimal.
“The electricity is about 6cm down in the tracks and the electricity is also connected to the earth, so even if we flood the road with salt water, if you measure the electricity at the surface, it's less than one volt.”