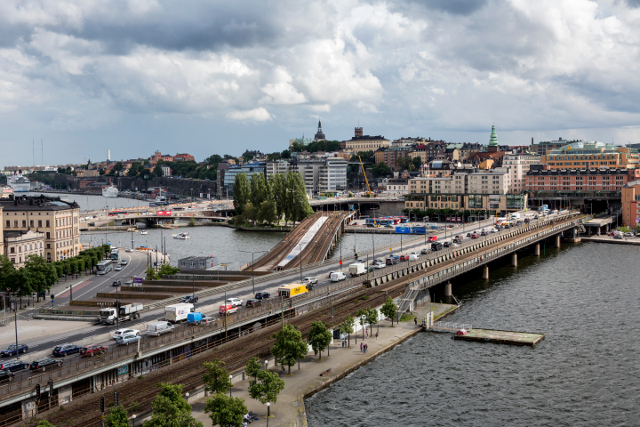 The Centralbron road in Stockholm, where one of the flags was found. Photo: Christine Olsson/TT

One flag was removed from the road bridge linking Stockholm Central Station to Södermalm island via Riddarholmen and the Old Town shortly after 2am on Friday, police told the Mitti newspaper.

Police are classifying the incident as racial agitation, but had no suspects by Friday afternoon.

Swastika flags were also hoisted in Stockholm suburbs Tyresö and outside the council hall in Huddinge. They were both removed by the owners of the flag poles early in the morning.

“Nobody should be able to kidnap the citizens' flag in this way,” Huddinge mayor Daniel Dronjak told broadcaster SVT, adding that they were now considering installing locks on the flag poles.

A Nazi flag was also hoisted outside a grocery store in Vetlanda and outside a glass museum in southern region Småland. The latter was taken down by local residents and burned to ashes, reported regional media.

“We've got the ashes of the flag, but I didn't see it when it was up. It is good that people in Boda show courage and react to this. We are going to save the ash as a symbol,” museum boss Maja Heuer told newspaper Barometern.

In the town of Nyköping, vandals sprayed Nazi graffiti, including swastikas and pictures of Adolf Hitler, who was born on April 20th 1889.