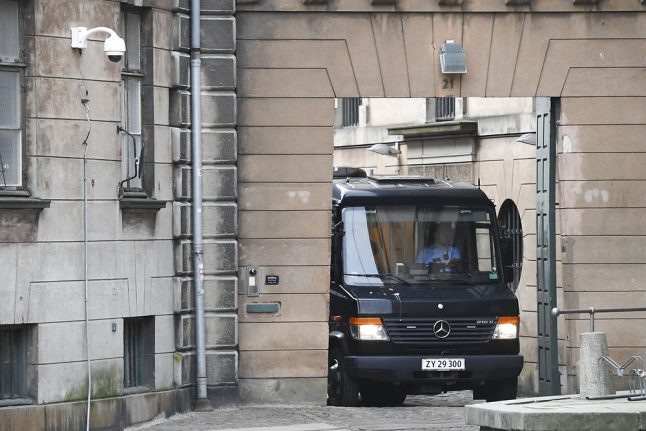 Peter Madsen, 47 — who is accused of premeditated murder, aggravated sexual assault and desecrating a corpse — has repeatedly changed his version of events since his arrest last August, a day after Swedish freelance journalist Kim Wall boarded his submarine to interview the eccentric self-taught engineer and semi-celebrity.

Madsen has since admitted dismembering Wall, 30, and throwing her body parts into the sea but denies killing her.

Prosecutor Jakob Buch-Jepsen and defence lawyer Betina Hald Engmark are due to present their final arguments on Monday, with the judge issuing a verdict no earlier than Wednesday.

The trial at Copenhagen's district court earlier heard evidence that Madsen had more than 40 video clips, including animated and so-called snuff films of women being impaled, hanged and beheaded on his laptop.

The prosecution says Madsen tortured and murdered Wall as part of a sexual fantasy.

It has said it will seek a life sentence, which in Denmark averages around 16 years, or safe custody, a legal alternative which would keep him behind bars indefinitely as long as he is deemed dangerous.

Madsen initially claimed he had dropped Wall off on dry land in Copenhagen on the night of August 10th, 2017, but he later changed his story, claiming that a heavy hatch door had fallen on her head and killed her.

When an autopsy report later revealed there was no blunt trauma to Wall's skull, he said she died after a sudden drop in pressure caused toxic fumes to fill the vessel while he was up on deck.

He has admitted cutting off the journalist's head, arms and legs, and stuffing the body parts into plastic bags weighed down with metal pipes before throwing them into the sea as he contemplated suicide.

A cyclist found Wall's torso floating in Køge Bay, off Copenhagen, 10 days after her disappearance.

The rest of her remains were recovered over the course of the next few weeks from waters off the Danish capital.

An autopsy report said Wall most likely died after being strangled or having her throat slit, after having been sexually abused, but was unable to definitively ascertain the cause of death.

Fourteen stab wounds and piercings were found in her genital area.

The court heard Madsen had brought a number of objects on board the submarine including a saw, plastic luggage strips and a very long, sharpened screwdriver.

The prosecution also cited a psychiatric evaluation of the accused, which described him as “perverse” with “psychopathic traits”.

The court was shown some of the video clips and animated films found on Madsen's hard drive, in which women were impaled and beheaded.

“It is not of a sexual nature. This is about strong emotions. I watch these videos to cry and to feel emotions,” he told the court.

Madsen has insisted he stabbed Wall's genital area to prevent gases from building up inside the body after death, which would have made it float to the water's surface.

The inventor said he didn't want her body found, to spare her loved ones the details of a death by toxic fume inhalation.

He was arrested on August 11th after he was rescued at sea as his submarine sank — intentionally downed, according to prosecutors.

The defence has criticised what it has called a lack of physical evidence against Madsen.

Under cross-examination, coroner Christina Jacobsen admitted she could not totally exclude the possibility of death by toxic fumes, because of the torso's decomposed state after being submerged in water for 10 days.

A submarine expert who inspected the Nautilus testified there was no soot in the vessel's air filters, saying that would be the case if Madsen's fumes scenario were true, although another expert called by the defence disagreed.

During Madsen's psychiatric evaluation, doctors found him to be cold when discussing the victim, and merely “curious” about his upcoming trial.

When they asked him why he dismembered Wall, he replied coolly: “When you're faced with a big problem, you break it up into parts.”