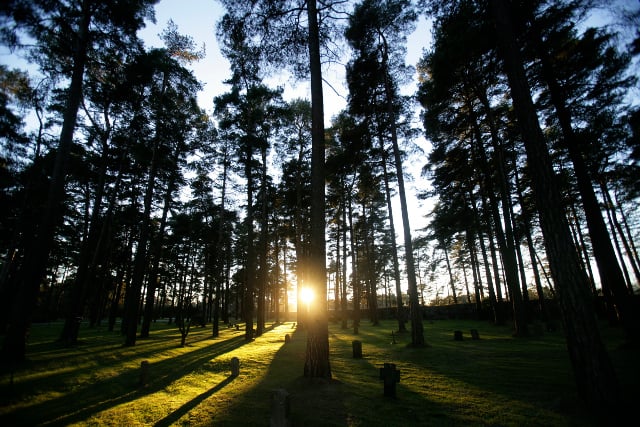 Some people think of cemeteries as foreboding places that provoke sadness or even fear. In Sweden, however, most cemeteries are beautiful oases that invite visitors to pay their respects to the lives of the departed in a variety of ways. Park-like paths encourage members of the public to walk among meticulously-tended grave sites and ancient runestones. Sheltered benches and quiet nooks inspire peaceful meditation.

These environments also implicitly invite and encourage visitors to learn about Swedish history and culture. After all, cemeteries and the gravestones and monuments in them are not meant to stand forgotten and neglected. They were created so the lives of the departed can be remembered and honoured. Without respectful interest in their history and meaning, valuable memories, stories and lessons stand to fade and become lost.

Presented here is a sampling of some of the remarkable history found in Swedish cemeteries that might inspire you to learn more about the country's past in a unique and poignant way.

Anyone living in one of Sweden's larger cities probably already knows of at least one large cemetery in that area. Residents of Stockholm, for example, may be familiar with Skogskyrkogården (The Woodland Cemetery), a Unesco World Heritage Site and the location of Greta Garbo's grave. Just due north, on the island of Djurgården, is a much older cemetery, Galärvarvskyrkogården (Galärvarv cemetery), where at least two monuments to significant and tragic events in Sweden's modern history can be found.

The most recent is an event that many native Swedes probably remember with heartbreaking clarity. But for those of who are newer to the country, the story of the MS Estonia may not be quite as familiar. Just a short walk from the Vasa Museum, in Galärvarv cemetery, three stone walls form a partially enclosed area that embraces a single tree and opens toward the water.

Inside the walls of this monument are inscribed the names of the 852 passengers and crew who died when the ferry MS Estonia sank in the Baltic Sea on September 28th, 1994. Only 137 people survived the tragedy, which occurred as the ferry made its way from Tallinn, Estonia, to Stockholm. After the RMS Titanic, it is the deadliest European shipwreck to occur in peacetime, as well as the worst to occur in European waters. The monument that remembers the victims of the MS Estonia ferry disaster. Photo: Victoria Martínez

Elsewhere in Galärvarv cemetery is a monument that might easily go unnoticed, but is an important reminder of a tragic event that took place during the Cold War. On 13 June, 1952, a Swedish military DC-3 aircraft was on a secret intelligence-gathering mission of Soviet radar stations in conjunction with the United Kingdom and the United States. Over the Baltic Sea, it was shot down by a Soviet fighter jet, killing all eight crew members on board. The incident became known as The Catalina Affair after one of the Catalina flying boats sent to search for the DC-3 was also shot down by the Soviets. Fortunately, all aboard the second aircraft survived.

Countless people have undoubtedly spent time taking in the history of the Vasa and Nordic museums without ever realizing how much history there is to discover and pay respect to just steps away amidst the peace and beauty of Galärvarv cemetery.

The same can be said for countless other large, city cemeteries around Sweden, including Lund's Norra kyrkogården (North cemetery), where a Polska kyrkogården (Polish cemetery) is the final resting place for survivors of Nazi concentration camps who came to Sweden in 1945.

In the spring and summer of 1945, some 31,000 survivors, about 40 percent of whom were Polish, arrived in Sweden, all in need of urgent medical attention. Many of these individuals arrived in Malmö, and received the care they needed in places like Malmöhus Castle, and in hospital in nearby Lund. Once recovered, they were transferred to refugee camps around Sweden to continue their recovery.

For some, however, help came too late, and many of those who died were buried in Lund's North cemetery. Over time, as those who survived also passed away, some chose to be buried in the Polish cemetery alongside their compatriots. In 1963, a shining silver monument was erected amongst these graves to commemorate the lives of those who rest there and serve as a vital reminder to humanity of the atrocities committed against them.

Just as most of us will live out our lives under the radar of major events, so have the majority of people throughout history. Accordingly, a wealth of “hidden” history can be found in the countless smaller cemeteries in Sweden's less-populated localities. Although only figuratively hidden, the freestanding timber klockstapeln (bell towers or belfries) that stand in some older Swedish cemeteries are still unknown to many people. These distinctive structures, which have been part of religious architecture in Sweden since at least the early Middle Ages, were influenced by the freestanding bell towers of southern Europe, such as the famous Tower of Pisa in Italy. They also served the highly practical purpose of protecting the valuable bells in the event of a fire in the church. Also in order to protect the bells, they were built extremely well, with many standing the test of time. One of the oldest, perhaps the oldest, in Sweden is the timber bell tower at Saint Laurentius church in Söderköping, which dates to 1583. More date to the 17th century, including several in Småland, where there are many small, historic churches. At Våthult church, the oldest church in Gislaved Municipality, parts of the structure date to between 1192 and 1255, while the bell tower dates to 1693. In the same municipality, the picturesque Norra Hestra church and its bell tower from 1699 or earlier, appear against the bucolic landscape like a vision from centuries past. In nearby Värnamo Municipality, the bell tower at Torskinge church, built in 1678, claims seniority among the three. Far older than the timber bell towers are the Viking runestones that can be found complete and in fragments in many of Sweden's older cemeteries. In Scandinavia, Sweden holds the lion's share of runestones, claiming between 1700 and 2500 hundred of them. Alongside these are relatively “newer” gravestones from the Middle Ages and beyond. Although the inscriptions on these are often unreadable to the naked eye, others are crystal clear, and provide tantalizing snippets of information about the individuals they commemorate.

At Gunnarp church in Falkenberg Municipality, two centuries-old gravestones rest against the wall of the church in remarkably good condition. Considering that most surviving gravestones are grander ones that commemorate the lives of the great and the good, it's wonderful to discover that at least one of these two memorializes the life of an ordinary woman who died in 1626. According to parish records, she was from a nearby farm, Ögärdet, at a time when Halland was part of Denmark. Her monument of common stone survived at least two previous churches on the spot, including one that was destroyed by fire. It now rests against the present church, consecrated in 1756, waiting to be noticed and remembered. Sadly, many grave markers are not noticed or remembered, even when they are extraordinary in some way. Such an example exists in Hovmantorp, Kronoberg County, though for how much longer is uncertain. What would otherwise be an unremarkable gravestone is made exceptional by the presence of a shining silver medal encased in glass within the stone. Bestowed upon Karl Hultberg, a civil servant, just a week before his death in 1902, the medal was placed in his gravestone where he could “wear” it in perpetuity. But with no relatives claiming responsibility for the gravestone, the fate of both it and the medal are now in question. In addition to the historical people and events commemorated in Swedish cemeteries, the grave markers themselves provide unique insight into Swedish history, as well as some mysteries. Among the most beautiful grave markers in Swedish cemeteries are the intricately-wrought iron masterpieces that combine the Christian cross and the ancient symbol of the tree of life. Originally handmade of cast-iron, an entry level version of these charming memorials would have cost about the equivalent of a cow, making them accessible mainly to the middle classes and above.

Though they were popular grave markers in Sweden during the 18th and 19th century, untold numbers were banished to the scrap heap over time, making them fairly rare finds today. Fortunately, historical preservation seems now to be the rule, and modern versions are also being made in the same tradition. Although the historic pieces are often lacking original details like stylized leaves, bells or flowers that were suspended from rings to move with the breeze, they are still remarkably beautiful. A tree truck gravestone in a cemetery in Kalmar. Photo: Victoria Martínez

Even rarer are the gravestones carved to look like tree trunks. Information on these unusual stones in Sweden is scarce, though it is interesting to note that similar gravestones, also from the late 19th to early 20th centuries, can be found in the Midwest United States, where many Swedish immigrants settled. The possibility of a direct connection is intriguing, and presents more questions than answers. But that is one of the beauties of history: it is as captivating for what it conceals as for what it reveals.

A beauty to be found in abundance in Swedish cemeteries.