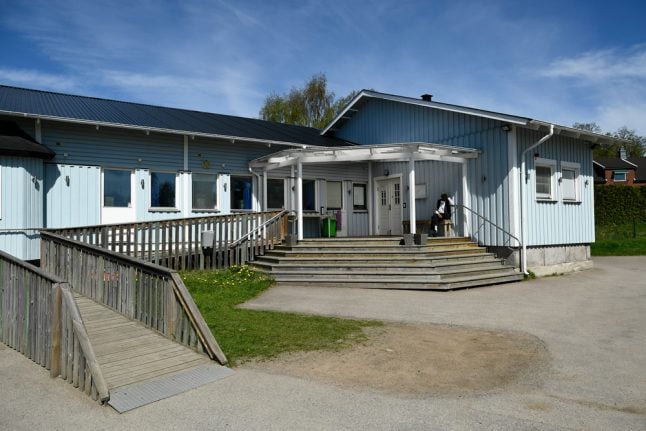 This mosque in Växjö will now feature calls to prayer on Fridays. Photo: Suvad Mrkonjic/TT
It was announced earlier this week that the mosque in Växjö will be allowed to feature a call to prayer on Fridays, provided the calls do not exceed 110 decibels, as heard from outside, or 45 decibels as heard from inside.
The mosque had become a flashpoint of national controversy, with the leader of the Christian Democrats instructing local politicians to vote against the call to prayer and the head of one of Sweden's leading Jewish organizations supporting the mosque on the grounds that not allowing the call to prayer would damage integration.
READ MORE: Mosque in Swedish town gets green light for calls to prayer
Although the decision is now a done deal, the controversy is unlikely to die down in light of Smålandsposten’s revelation that the Catholic church Sankt Mikaels has twice been denied the right to ring church bells on the grounds that it would be disturbing to area residents. The church is roughly 1.5 kilometres from the mosque.
The church’s priest, Ingvar Fogelqvist, told Smålandsposten that the request to ring church bells was denied in the 1990s and again in the early 2000s. The church has just a small bell located inside the church, which the priest said “sounds good, but can't be heard far.”
Now that the nearby mosque has been granted permission to conduct a call to prayer each week, the Catholic priest said that the church may reapply for the right to ring outdoor bells to mark Sunday services and special occasions like funerals.
“It is a matter of fairness and with the decision granting the mosque permission to do a call to prayer, we have discussed the possibility of applying again,” Fogelqvist told Metro newspaper.
The priest said that having the ability to ring church bells “would make the Catholic Church a bit more visible here in the community” but said he was resigned to “a long process” of obtaining permission should the church decide to seek it.
Växjö is not the first Swedish town to allow a mosque to have a call of prayer. A mosque in the Stockholm suburb of Botkyrka holds a call to prayer on Fridays, and the council there said it has received no complaints. There is also a mosque in Karlskrona with calls to prayer.