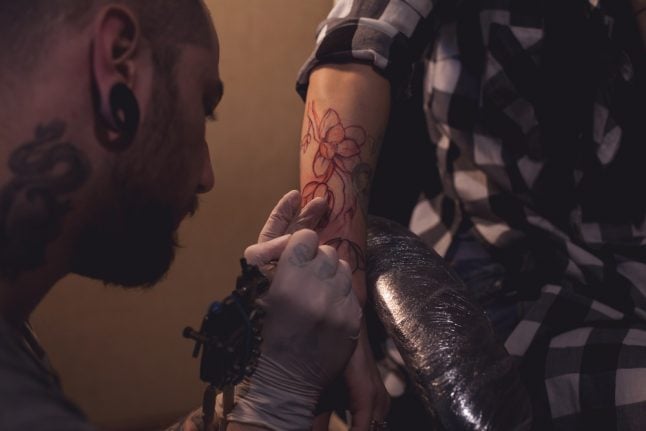 Photo: Depositphotos
But one Swedish woman has turned her failed tattoo into a whole new identity for her child.
Local newspaper Blekinge Läns Tidning reported over the weekend that 30-year-old Kyrkhult resident Johanna Giselhäll Sandström went to a local tattoo studio around three years ago to get the names of her two children inked on her arm. After consulting with Sandström about the correct placement of the design, the tattoo artist did his thing and Sandström went home with what she thought was a permanent declaration of love to her kids Nova and Kevin.
There was just one problem. Kevin had become ‘Kelvin’.
“I said I wanted the names of my children tattooed on me and I gave the artist their names. The artist drew the design and didn’t ask anything about the spelling so I didn’t give it any more thought,” Sandström told Blekinge Läns Tidning.
When she discovered the mistake, the young mother broke down in tears.
“My heart stopped and I thought I was going to faint,” she said.
Sandström went straight back to the tattoo parlour, where the artist laughed and said there wasn’t much he could do. After all, the young mother had been given the chance to review the tattoo before the work began. He agreed to give her a refund and handed her the phone number of a tattoo removal clinic in Växjö.
VIDEO: Why do so many Swedes have tattoos?
When Sandström discovered that it would take multiple treatments to remove the tattoo, she and her husband opted for a different course of action.
“We decided to rename the boy,” she said.
That’s right. Kevin became Kelvin. Not just to match the tattoo but because the name had grown on the parents.
“I had never heard the name ‘Kelvin’ before. There isn’t anyone who names their kid Kelvin. So when I thought more about it, I realized that no one else has this name. It became unique. Now we think it is better than Kevin,” Sandström said.
Sandström said she’s okay with how things turned out and that her son was not affected by the name change.
“He wasn’t so old [at the time of the tattoo] so he didn’t think about it. He’s five now, but when I got the tattoo he was approaching two,” she said.
Sandström and her husband recently had a third child, a daughter named Freja. The young girl’s name will also be tattooed on her mother’s body but this time Sandström says she will be ready.
“I need to get that name tattooed but I’m going to write it down on a piece of paper and check it over ten thousand times,” she joked.
You can see Sandström’s tattoo here.