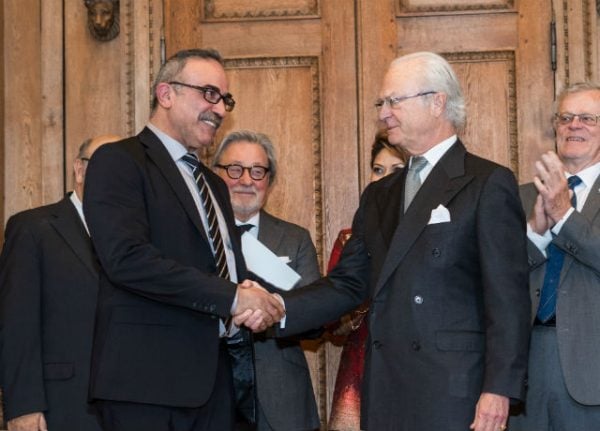 Cheesemaker Mohamad Godeh being awarded the Årets Nybyggare award 2017 by the King of Sweden. Photo: Internationella företagare i Sverige

Starting your own business is a challenge few people will attempt in their lifetime. That challenge is doubled when you’ve also moved halfway around the world and opened a company in a new country.

Despite that, one in five businesses in Sweden is founded by ‘new Swedes’, a wave of immigrant entrepreneurs who are reshaping Sweden’s business landscape. Yet their contribution often goes unnoticed.

It's what led the Internationella Företagare i Sverige (IFS) Foundation to establish H.M. King Carl XVI Gustaf's prize Årets Nybyggare in 1999. The prize is awarded by His Majesty each October at Stockholm Castle.

Nominate a foreign entrepreneur who deserves to win a prize from the King of Sweden. Entries accepted until June 30th.

Palestinian-born, Malmö-based cheesemaker, Mohamad Godeh won the award in 2017 after starting his own cheesemaking company, Nablus Mejeri. Their company is named after the Godeh family’s home city of Nablus, famous for its traditional cheese.

Mohamad, his wife Samar and their children, migrated to Sweden in 2004, following years of unrest in their homeland.

After a trip back to Palestine in 2008 they began to think about how they could make their generations-old family recipe in their newfound homeland, Sweden.

The plan was originally just for home consumption. Little by little, as both Swedish and Palestinian friends and family began to get their hands on the coveted cheese, suggestions came rolling in that they start to produce it commercially. In 2010 they officially launched the company and began operations.

“My wife and I did not realise how much work and effort we were going to invest in this family business, but looking at where we are now and what we have created makes every hour we spent on the dairy worth it,” Mohamad says.

Last year, after being nominated and winning the Årets Nybyggare award, the business expanded from its largely Skåne-based activities to a national level with large supermarket chains around the country, as well as local restaurants and shops stocking Nablus Mejeri products.

“I feel really proud of what my family has achieved. We moved to Malmö, Sweden hoping for a bright future. The award is a huge acknowledgement reflecting the high quality we produce and also a great help for our success on the Swedish market,” he concludes.

In 2016, a similarly inspiring story emerged.

Moa Gurbuzer, who emigrated with her family from Turkey to Sweden as a teenager, was a family therapist and social worker before founding her company, MRG Wines, making non-alcoholic still and sparkling wine in 2013.

Photo: Moa Gurbuzer (Årets Nybyggare winner 2016) with a selection of her award-winning wine

“I had seen many families and parents mostly, that can’t handle the drinking and where the children are suffering or neglected because of the parents drinking,” she says.

The recognition Moa has received from Swedes has been extremely positive because they understand the importance of MRG Wines’ mission.

“Our interest is to make things for society. So for me this was a social movement that I wanted to do. It’s another form of social work,” she explains.

Her experience of navigating the process of starting her own business in Sweden was an easy one, she says. “To start a business is just to go to the tax services and they will help you and give you information”.

As easy as the process was, she still has some advice for anyone hoping to follow in her footsteps.

“One of the things that is very important in Sweden is that you have to have a strong network behind you”.

Since winning, Moa says her life has changed astronomically, in part due to the fact that the King of Sweden, Carl XVI Gustaf presented her with the award.

“It changed a lot of things. Having the award from the King was something special,” she says.

It also boosted the public’s confidence in her business. “To be seen in photos with the King also gives the status for international markets, which was really very good to have,” she adds.

MRG Wines currently exports to between 10-15 countries, including Belgium and the Netherlands.

Nominations are now open for the 2018 award. If you know somebody who you think deserves this very special prize, visit the IFS website and nominate them for Årets Nybyggare 2018.

This article was produced by The Local Creative Studio and sponsored by Stiftelsen Internationella Företagare i Sverige, IFS