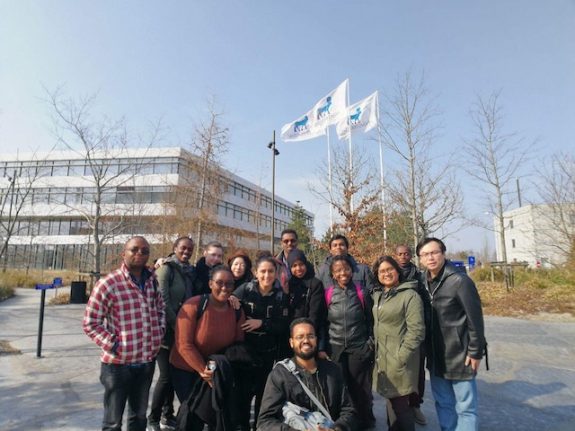 One common feature we share is the desire to innovate society to enhance prosperity. That is why we all have chosen to apply our knowledge to different health science fields. When we started our board, we set specific goals to unlock these desires. And our key aim was to build a strong L.I.N.K. (Learning, Interacting, Networking and Knowledge sharing) with an organization or network with similar principals.

As a continuation of our aim, we went on a splendid field trip to Novo Nordisk pharmaceutical company on 13th April 2018. Novo Nordisk is a Danish-based multinational pharma company with a strong historical background.

The rationale behind choosing Novo Nordisk was to know more about its recent innovations, business cultures, corporate social responsibilities (CSR) and, last but not the least, its future projects.

At first, it was difficult to figure out where and which particular department we needed to explore to gain insights. A couple of internal meetings helped us to determine that chronic diseases, especially diabetes, are a major burden for the universe. What's more, this notorious disease is exponentially increasing with every second.

According to the IDF (International Diabetes Federation), '425 million adults have diabetes and 1 in 2 remains undiagnosed. It also presents a significant health and economic burden across Europe, affecting 58 million people and costing 145 billion euros per annum.'

To further feed our knowledge, a collective decision was made to visit an organization that deals with this challenge along with the vision for the Sustainable Development Goals and which ultimately led us to visit Novo Nordisk's headquarters.

However, while organizing the event some challenges were faced; the biggest of which was managing the time schedule with proper logistic distribution. But at the end, it was overcome by early planning, synchronized internal and external communication and dividing shared responsibilities.

More than 20 participants joined in this event with us from different NFGL networks. Some participants even came at their own personal expense as monetary support for everyone could not be provided. We believed this showed their inner passion for acquiring more knowledge regarding the organizational contribution for the patients as well as society.

The journey started in a night coach before the event which was during the day. We were roused from sleep by the lovely daylight while we were passing over the Öresund bridge, the extension connecting between Sweden and Denmark.

We were truly surprised and honoured when we saw a company representative waiting in the station to receive us with a company logo in his cycle. The coordinators were additionally cheerfully sitting tight for us and they welcomed us with refreshments upon our arrival and after that, the program began as per the agenda.

The event lasted for four hours during which we were introduced to the most significant aspects of the company's accomplishment and leadership in the pharmaceutical market. All attendants had a fantastic opportunity to listen to the presentations of five keynote speakers from different departments of Novo Nordisk including two alumni of Karolinska Institutet, who are already employed at Novo Nordisk. They also shared the opportunities that lay beyond academia as a health science expert.

Apart from that, we had the honour to meet the company's VP of Corporate Sustainability, Susanne Stormer, who shared with us the key points of the company's Corporate Social Responsibility (CSR). She mentioned, “We act responsibly by respecting universal principles and accounting for performance in an integrated annual report.”

The event ended with the panel discussion and Q&A session that lasted for approximately an hour.

To sum up, we would like to give our heartiest thanks to the SI NFGL Global Network for this incredible chance and the possibility to get one step closer to the desired company for most of the attendants.