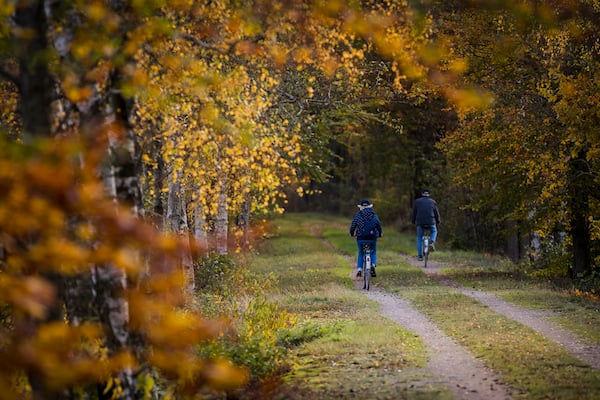 If you're only here for a short time or if you want to see great Stockholm sights casually, you’ll have to go to Hellasgården, the city's largest outdoor activity center only 15 minutes by car from the centre. You can also traverse the route easily on foot by simply taking the train to its stop in Sickla and walking about 15 minutes to the reserve's opening at Nysätra.

The paths tend to interweave and disperse throughout Hellasgården. There are no official biking trails, but depending on where you find yourself in the reserve's large area, you'll be able to explore paths weaving all around Lake Källtorpssjön, Lake Söderbysjön, and many more. Watch a short video clip about Hellasgärden here.

As you ride, you can also be sure to encounter the reservoir’s very own café by the waterfront, open every day of the year! On weekends, the charcoal grill is fired up, where you can cook your own hot dogs and hamburgers purchased inside the café. You can also, for a generous fee of 40 kronor, of course, bring your own meats to cook!

One good route to take is The Viking Route. Already intriguing, isn't it? Take this 35 km path starting anywhere along Lake Erken, a name meaning “The Shining One” in old Swedish. The lake is the third largest lake in the Uppland region; so you're sure to get a fair workout riding its entirety.

If you have the desire, you may want to head a bit south on your tour of Erken toward the villages of Malsta or Lohärad. These towns are known for medieval origins and share gorgeous agricultural land to traverse. If you continue the excursion which is detailed here, you may even be able to see where an 11th-century Viking boat was discovered. It's kept on display at the Erikskulle Museum. If you have a full day or more to ride, you must try cycling on Stockholm's archipelago, consisting of 24,000 islands.

Now you may be thinking, how am I going to island hop on a bike? Well, most of the archipelago ferries actually permit bringing your bike on board, depending on space availability. So it wouldn’t be too difficult to bring your bike along on your archipelago adventure!

There are so many options for great trails that exist in the archipelago that you may just want to experiment yourself, but we will gladly toss out one of our favorites so you can pick and choose yourself. Do you want to experience a historical, less touristy route in the rich southern archipelago? Well, there is lots to see biking on the largest of the southern islands.

You can catch it by traveling on the ferry, Ornö Kurir, from Dalarö. A bike can be carried onto the ferry or you’re free to rent one when you get there.

On this 30 km route, you can take a glimpse at Ornö’s history and the small population of 300 as you wind past cemeteries of the Bronze Age in Hässelmara, the Ornö church in Kyrkviken built in 1886, and ride around Lake Stunnträsk, the deepest lake in and near Stockholm at 40 meters. Tyresta National Park will provide anyone with the biking itch a substantive experience deep in about 1,960 hectares of Haninge and Tyresö about 20 km south of Stockholm. There are around 28 km (17.4 miles) of hiking and biking trails; a comprehensive map of the park can be found here.

You will enter through the park's main entrance in Tyresta city, as it lies right next to the park's rich untouched greenery and rift valley, filled with great 400 (or even 500!) year-old pines, glassy lakes, luscious forests, and many unusual plants like Labrador tea and sweet gale. While you ride, you may even see remnants of the fire that burnt down about ten percent (4.5 square km) of the park and reserve in August 1999.

If you would like to know more, visit or contact their information center, Naturum, in Tyresta village. There, they can inform you about the culture, animals, insects, trails, campsites, and regulations of the park.

If you're looking for a 440 km stretch biking path (excluding all of the breaks for exploration!), this one is yours. As one of the oldest cycling routes Sweden has known, it connects to a vast amount of other routes as well, measuring up to 800 km in potential extensions.

The path circles around Lake Mälaren on a pretty easily accessible and plain landscape; not too hilly or too rough. So if you're more into the rocky terrain, this likely will not be for you. However, everyone likes a great lakeview! You'll be able to begin the path anywhere off the shore of Mälaren, though you can also start the path near Johannesfred in Stockholm, taking it through Lovön and onto Färingsö. A map can be found here.

You may be faced with more people and development along this path compared with the others, but you can be certain that you won’t have to stop for many reasons other than needing to take another picture of the glassy lake and horizon!