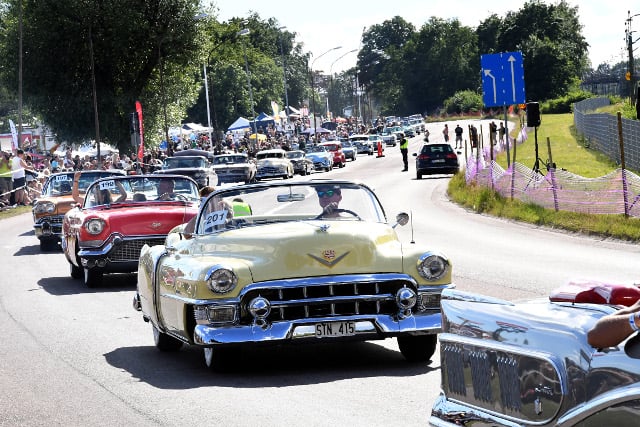 For anyone willing to venture outside the usual destinations, Sweden offers some unexpected opportunities to discover history. From a shrine to a heavy metal music icon to the birthplace of a favorite Swedish candy to Native American culture, here are eight places off the beaten path in Sweden where you can experience history in ways that just might surprise you.

What is today a summer seaside resort and sailing paradise was once a haven of religious, economic and professional freedom where aristocratic émigrés fleeing the French Revolution lived alongside criminals fleeing bailiffs.

In 1775, Swedish King Gustav III declared the Swedish island of Marstrand in Västra Götaland a free port where ships, goods and people from around the world could enter without exception or taxation. At the same time, all residents were granted a measure of legal and economic autonomy found in few other places, including complete freedom of religion, exemption from most taxes, and easy naturalization for foreigners who bought and maintained property. Significantly, even individuals accused or convicted of non-capital crimes in other lands were granted protection and immunity in Marstrand.

The result was that Marstrand Free Port became a unique and diverse community where otherwise marginalized or excluded groups could flourish. The first Jewish settlement in Sweden was established there, for instance, along with an early synagogue. On the other hand, it also became a paradise for smugglers, privateers, and anyone keen to abuse the system.

Ultimately, the problems were considered to outweigh the benefits, and in 1794, at the request of the island’s representatives, the Swedish government terminated Marstrand’s status as a free port. Still, with the 17th century Carlsten Fortress looming over the island, it’s still possible to imagine what Marstrand would have been like when unparalleled freedom and vice reigned side by side. Pay tribute to a rock legend

The church in Dörarp dates to the 13th century, but it is a far newer historical site located just outside the small village in Kronoberg County that attracts visitors from around the world.

Erected in 2006, the memorial stone along the old E4 highway commemorates the life of Cliff Burton, a talented bass guitarist and songwriter who was tragically killed near the spot on 27 September 1986.

Burton was asleep when the tour bus that was taking him and the other members of the band Metallica to their next show in Copenhagen slid off the road about 12 miles north of Ljungby. Propelled from a window, the 24-year-old was then fatally crushed by the bus. No one else was killed or seriously injured.

Although his life was cut short, his incredible talent is still recognized by both fans and the music industry. In 2009, he was inducted into the Rock and Roll Hall of Fame along with other members of Metallica, and in 2011, Rolling Stone magazine readers voted him one of the top 10 bassists of all time.

But it is at the Cliff Burton Memorial near Dörarp, Sweden, that fans come to show their personal appreciation by sharing a drink, leaving an offering, or just contemplating the dedication and talent of a rock legend who died too soon. Step into an iconic work of art

At the dawn of the 20th century, a small cottage near Falun became an international icon of modern interior design, and its owners nothing short of lifestyle influencers.

Long before Ingvar Kamprad put an IKEA catalog and a Billy bookcase into homes around the world, spouses Carl Larsson (1853-1919) and Karin Bergöö Larsson (1859-1928) literally and figuratively wrote the book that defined modern Swedish design. Published in 1899, “Ett Hem” (A Home), featured 24 watercolors of Lilla Hyttnäs, the Larsson home in Sundborn, Dalarna.

A true artistic power-couple, Carl was responsible for the paintings, while Karin was the driving force behind the distinctive interior design of the home. The book was a bestseller, inspiring Scandinavians, Germans and Americans in particular to imitate the then-radically modern and eclectic Arts and Crafts style reflected in the paintings of the home.

Even today, more than a century later, there is a timelessness and permanence to the lifestyle Karin created and Carl captured with his brush. This is exemplified at Lilla Hyttnäs itself, which is recognized as one of the most famous artist's houses in the world. Preserved in time by Carl and Karin’s descendants, it just might be as close to stepping into a painting as one can get. Walk on the trail of history and literature

Few places combine an immersive experience in both literary history and social history better than the Emigrant Trail, which traverses more than 100 kilometers of Kronoberg and Kalmar Counties in Småland.

It is along this trail, in Emmaboda Municipality, that Swedish author Vilhelm Moberg (1898-1973) was born, raised, and directly impacted by the causes and effects of the Great Emigration that saw more than a million Swedes emigrate, mainly to North America, between 1830 and 1930. His childhood experiences inspired him to write the four novels of The Emigrants Series, published between 1949 and 1959, which tell the story of a fictional group of emigrants from Lessebo Municipality.

Anyone walking, biking and even canoeing along the Emigrant Trail is following in the footsteps of Moberg, his fictional emigrants, and the approximately 300,000 actual emigrants who left Småland during the Great Emigration. In addition, the trail stops at a variety of other historical locations, including vestiges of ancient and prehistoric times, a variety of traditional glassworks, and even the site where the big screen adaptation of The Emigrants was filmed in the 1970s.

It is said that the number of American classic cars in Sweden rivals that of America itself. Although the annual Power Big Meet, hailed as one of the biggest (perhaps the biggest) car shows in the world, was in early July, there are dozens of classic car shows taking place up and down the country throughout the whole summer.

Many of the attendees embrace and celebrate not just the cars, but also mid-century American culture. Music, clothing and popular culture of the ‘50s and ‘60s permeate the three-day event. It’s enough to make any classic car fanatic think they had died and gone to heaven. Taste history at its sweetest

It could be argued that some of the best moments in history have occurred when a candy was invented. In the case of the invention of polkagris (peppermint rock), it doesn’t hurt that these red and white striped peppermint sticks have a backstory that includes an inspiring woman and a scenic location.

In 1859, Amalia Eriksson (1824-1923), a widow with a daughter to support, received special permission to open a bakery in Gränna on the shores of Lake Vättern near Jönköping. One of her specialties was polkagris, and it was its immense popularity that propelled her to social prominence and financial security.

Soon, although Amalia kept her recipe secret during her life, imitators sprang up in Gränna to keep up with increasing demand. In 1915, Amalia received the royal seal of approval when Crown Prince Gustaf Adolf and Crown Princess Margareta visited her bakery.

To this day, Gränna is the center of Swedish production of polkagris, with no fewer than a dozen sweet shops producing the candy. Each year, hundreds of thousands of visitors are drawn to the small town of Gränna, no doubt in part to buy one of Sweden’s most popular souvenirs at its origin, and – perhaps – to visit the statue of Amalia Eriksson to thank her for her sweet contribution to history. Few historical periods capture the imagination of people of all generations and nationalities like America’s Old West. And while High Chaparral in Kulltorp, Jönköping County, may be a theme park, it still manages to capture aspects of the period in some surprisingly authentic ways.

Although many people will be drawn to High Chaparral for the performances and experiences emphasizing cowboys, Can-Can girls, and real and fictional personalities like Annie Oakley and Zorro, it is on “Indian Island” where some of the more historically- and culturally-authentic experiences can be found. There, American Plains bison graze nearby while Native Americans demonstrate traditional dances, crafts and activities.

Daniel Hotomani, a Native American of the Nakota Nation from Winnipeg, Canada, who has been intimately involved with the program for eight seasons, says it is all about building cultural bridges. “For me, the key is sharing the message of the history and culture of the First Nations peoples of North America,” he explains. “It’s a great opportunity for cultural enlightenment.” Get your kicks on Sweden’s ”Route 66”

Anyone interested in soaking up history via a “Route 66” type of experience will no doubt be thrilled to learn about Sweden’s Retro Vägen (Retro Road), which winds through swathes of Västra Götaland.

Centered in Nossebro, where two driving routes begin – one headed south to Gothenburg and the other north to Skaraborg – Retro Vägen was started in 2010 as “a retrospective view [of] the design, fashion, trends and technology from the 1950’s to the 1970’s.”

Traveling on Retro Vägen South are highlights such as the Petrol Station Museum (Gammelmacken) in Sollebrunn, the Retro Apartment Museum in Gothenburg, and Ginza Retro Store in Fåglum. On the North route, the Air Force Museum in Såtenäs, Inga’s Café in Lidköping, and The Mercedes Barn (Mercedesladan) in Lyrestad, all offer glimpses into life in the first half of the 20th century. A variety of retro and retro-inspired eateries and accommodations line each route, making it a truly immersive experience. This article was first published in June 2018 and updated in July 2019.