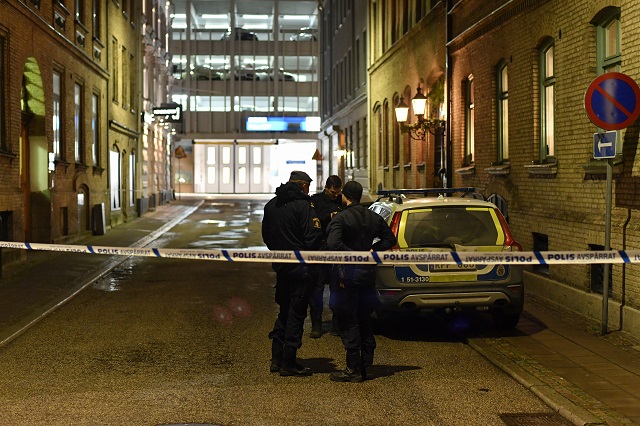 The area near the synagogue cordoned off after the attack.

The men, aged between 19 and 24, were sentenced for aggravated unlawful threats and aggravated attempted damage. There was no serious material damage to the building and no-one was injured in the attack, although around 20 people participating in a youth celebration at the synagogue briefly took shelter in a cellar.

The youngest of the three was sentenced to 15 months' jail time, while the other two were sentenced to two years each. The sentences were significantly longer than the legal minimum for the charges, due to the nature of the crime and the hate motive.

In its judgment, the court wrote that the perpetrators had “the clear goal of threatening, harming, and violating members of the synagogue and the Jewish community more generally” and concluded: “The crime therefore had a hate motive.”

One of the men, a stateless Palestinian citizen, will also be deported from Sweden after serving his sentence and banned from returning before 2028. The other two both have refugee status and permanent residence, meaning they cannot be deported. The trio were accused of carrying out the attack “together with several unknown persons”. In total, around 12 masked men were seen on video footage apparently participating in the attack; police made five initial arrests but later released two men due to lack of evidence.

They targeted the synagogue just days after US President Donald Trump recognized Jerusalem as the Israeli capital, and Sweden was one of several European cities to experience anti-Semitic incidents.