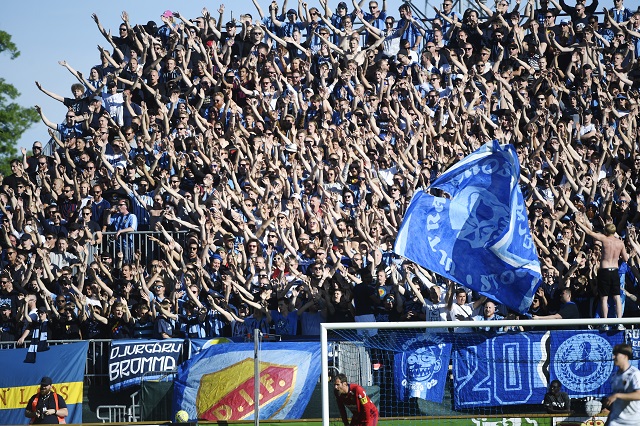 A football match at the Uppsala stadium in May. Photo: Fredrik Sandberg/TT

All staff at the Studenternas stadium, an hour north of Stockholm, will be trained in LGBT issues in order to create a welcoming environment at the venue, and the facilities will also be designed to be as inclusive as possible.

The LGBT certification means that all toilets and dressing rooms will be adapted so that there are accessible options for all athletes and spectators, regardless of their gender identity, including gender neutral toilets where possible.

“Uppsala municipality aims to be open and inclusive, where everyone has the same rights and possibilities,” Danne Eriksson, the municipality's marketing director for sport and leisure, told The Local.

“We want to guarantee equal treatment in all areas, regardless of gender, gender identity, gender expression or sexual orientation.”

He said that the certification of the stadium was “one part of the wider work” being carried out in Uppsala to become more LGBT-friendly, after a detailed plan in the area was first drawn up by the municipality in 2017.

The aims of introducing LGBT-certification to the stadium are “to increase the feeling of belonging, comfort, and safety” as well as “improving knowledge and understanding of LGBT people and equality” within the municipality, Eriksson added.

The certification will be valid for two years, after which authorities will have to apply for a renewal, meaning that all staff as well as companies that use the stadium must carry out training in LGBT issues.

The multi-use arena hosts both football and bandy games as well as concerts and other events, and is undergoing major renovations set to be completed in 2020.

Sweden regularly scores highly on rankings of LGBT-friendly destinations, and in 2015 the country got its first LGBT-certified swimming pool, with a changing room designed for use by the gay and transgender community as well as disabled visitors or those who for other reasons, such as religion, preferred more privacy while changing.

And last autumn, the Swedish Ice Hockey Association announced that referees would wear the rainbow badge on their jerseys throughout the season as part of a move to promote inclusivity and equality within the sport.