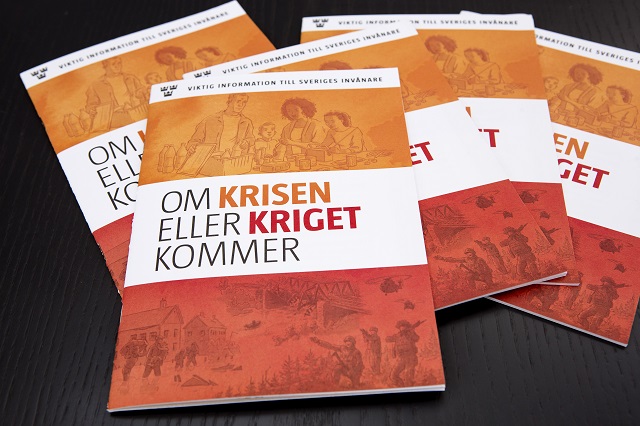 The brochure: 'If war or crisis comes'. Photo: MSB

“During 'crisis preparedness week' we received around 300 calls every day,” Johan Landenmark, an administrative official at MSB's contact centre told SVT. “We also had 60 to 80 chat messages and 100 emails each day.”

Many of those who got in touch with the agency wanted to know why the booklet was being sent out, and whether any specific event or trend had made it necessary. It was the first such awareness campaign since the days of the Cold War, and MSB's General Director Dan Eliasson said the update had not been prompted by a specific threat, noting: “Sweden is safer than many other countries but threats exist.”

There were further questions from people with disabilities who needed to get in touch to receive accessible versions of the information as well as asking about extra preparations for a crisis situation.

The brochure contained information on understanding Sweden's warning signals, identifying fake news and misinformation, and preparing by stocking up on water, food and blankets.

READ ALSO: Why Sweden is home to 65,000 fallout shelters

The new edition of the brochure was reported internationally, however some non-Swedish speaking residents were concerned when it arrived in the post.

“Anybody else receive this in the post today and know what it’s about? #cantreadswedish?” one foreign resident wrote in an expat Facebook group at the time.

The agency had said when releasing the booklet that it was prepared for an influx of questions, and set up a contact centre to deal with them, operating between May 28th when the first booklets were sent out and June 29th, and answering questions in nine languages.

While some people may have been concerned to receive the brochure, others had a more light-hearted reaction with the brochure turned into a meme online. Landenmark said some of the people who got in touch with MSB had only seen these edited versions shared online rather than the genuine booklet.

A Photoshopped version of the brochure with the title 'If your beer gets warm in the sun'.

However, he viewed it as a positive that the brochure became the subject of online jokes, saying it showed “that people read the booklet we sent, and got engaged”.