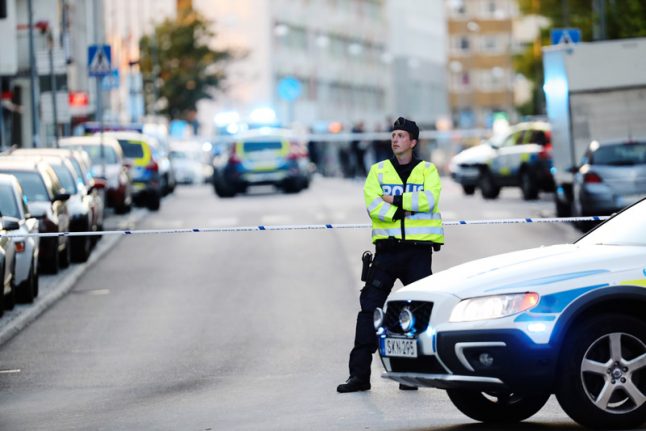 Police closed off a large area of central Helsingborg after the shooting. Photo: Andreas Hillergren/TT
Police received word of the shooting at around 8pm. The incident took place near Gustav Adolf Chuch.
According to the police, the shooting took place outside and responding officers closed off a large area in central Helsingborg. The incident is being investigating as attempted murder.
The four individuals were taken to hospital to treat their injuries, but police did not immediately say how badly hurt they were. Broadcaster SVT reported that three of the shooting victims, all young men, were seriously injured while the fourth suffered only minor injuries.
At least one of the individuals involved was also stabbed, police said.
SVT reported that the shooting was gang-related but as of the early Sunday morning hours, police did not confirm that information.
“I have no comment. Four were injured and we will figure out what happened,” police spokesman Fredrik Bratt said.
An eyewitness told SVT that he saw “people screaming and running in all directions” and described the scene as “complete chaos”.
As of early Sunday morning, police had not arrested any suspects.
In recent years, Helsingborg has suffered multiple shooting incidents but police spokesman Rickard Lundqvist was not ready to tie the latest shooting to past events.
“It is far too early to make any conclusions,” he told TT.