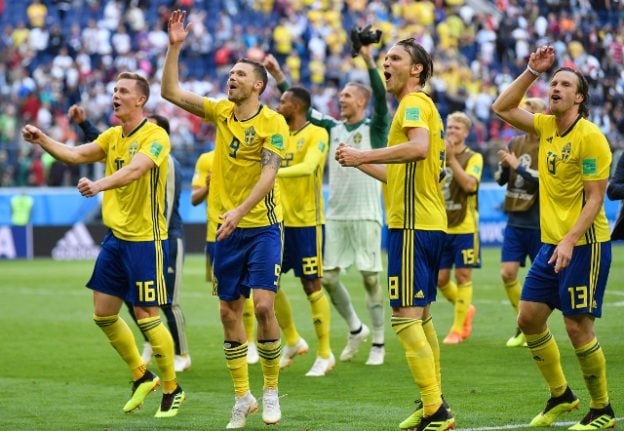 In eight competitive meetings, England have won just once – a 3-2 victory in the group stage at Euro 2012 – with two wins for Sweden and five draws.

Saturday's match in Samara will be the third World Cup clash between the two countries – after a 1-1 draw at the 2002 edition before a 2-2 draw four years later in Germany.

England coach Gareth Southgate, who was part of the squad in 2002, conceded previous teams had perhaps not treated Sweden with the respect they deserved.

“We've not got a good record against them, I think we've always underestimated them,” Southgate said following a dramatic victory over Colombia in the last 16.

“They have good plans, they have a clear way of playing – and it's bloody difficult to play against.”

“They are greater than the sum of their parts more often than not, so that is a hugely difficult game for us.”

THE LOCAL'S ANALYSIS: Why Sweden won't be scared of England

Sweden may be short on star power following the retirement of Zlatan Ibrahimovic, but Janne Andersson's men secured a place in the finals at the expense of the Netherlands and Italy.

They also beat title contenders France in qualifying, while only a late Toni Kroos strike denied them a point against defending champions Germany in the group stage.

“We've proved time after time, even when we play the big nations we find a way to win the game,” said defender Mikael Lustig, who is suspended for the England tie.

“This World Cup has been crazy so far so hopefully it will continue like that.”

Sweden remain one of the least fancied teams in the knockout stages, but captain Andreas Granqvist admitted that could play to their advantage.

“Someone said something about 99 times out of 100 England would beat us,” said Granqvist, who could miss the birth of his second child for the quarter-final.

“Well, it's fun for England to have that sort of confidence. Let's play the game and see how things go.”

Swedish football journalist Kristopher Karlsson told AFP his country's success against England can be partly traced to the footballing links between the two nations.

“Playing England is as big as it gets for a Swedish football player. They grow up on English football,” he said.

“It has been like that since our equivalent of BBC started broadcasting the English first division in the late 1960s.”

“So you have one team who are playing a game as big as it gets in their international career. And you have another team with everything to lose. A team which in the past has had delusions of grandeur.”