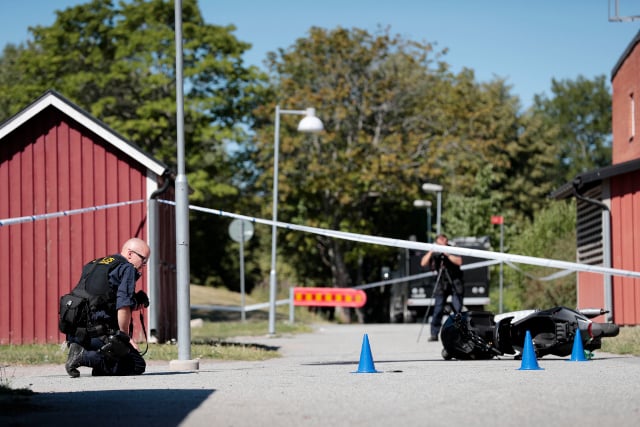 Police at the scene of the shooting last week. Photo: Pavel Koubek/TT

Two people died in the Vivalla suburb of Örebro on Tuesday after a shooting linked to gang conflicts in the area, a known trouble spot in the Swedish city.

Three people, aged 31, 20 and 15, were remanded in custody in the past week on suspicion of murder. The oldest has previous convictions for weapons and narcotics offences and assault, report Swedish media.

A fourth man, also 31, was remanded by Örebro District Court on Monday. He too has previous convictions and, reports SVT, has links to militant islamist organization Isis.

The man is one of around 20 to 30 people from Vivalla who have travelled to Syria and Iraq to join terror organizations in recent years, according to SVT.

The broadcaster reports that the man left Sweden in 2013 and joined a group which later joined Isis when the latter proclaimed its caliphate.

He returned to Örebro a few years ago when his brothers were thought to have died in battle and was treated in a hospital in the city for war injuries.

His time in Syria is not part of the case relating to last week's shooting, said his lawyer, adding that his client also denies the murder allegation.

According to estimates by Sweden's intelligence service Säpo, around 300 people travelled from the country to Iraq and Syria in order to join militant groups between 2012 and 2016. The number has since dropped.