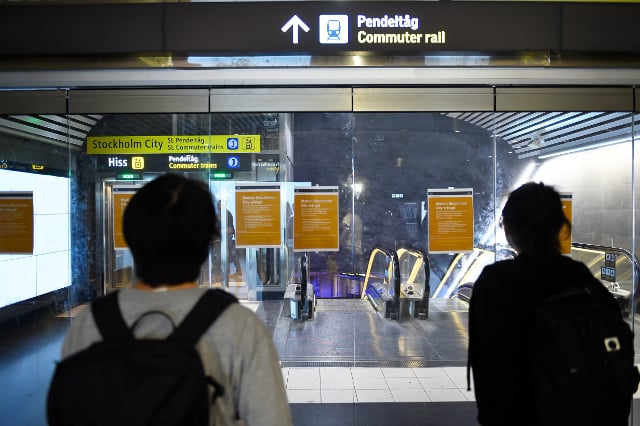 The Swedish capital's public transport operator SL said it had made the call after it was discovered on Thursday that the escalators at the two stations were faulty.

“The control showed that several escalators were in such bad shape that SL can't guarantee that it's safe to travel with them,” it said, adding that according to its safety regulations the two stations, which are both deep underground, have to be shut down if there are not any working escalators.

“Without working escalators at the station, it's not possible to evacuate them safely. Therefore, the stations are forced shut down for traffic until we can run the escalators,” added SL on its website.

FOR MEMBERS: How you'll be affected by Stockholm public transport disruption this summer

Thursday's checks were carried out after an incident on Monday, when several people were injured when one escalator without warning stopped and started running in the wrong direction at Stockholm City.

She said they were “incredibly surprised” when maintenance workers then opened the escalator and found rust and “extensive wear and tear”. Similar problems were discovered upon further examination of other escalators at the stations.

Stockholm City and Stockholm Odenplan are part of the city's new commuter train line 'Citybanan' and opened only a year ago to much pomp and circumstance. Stockholm mayor Karin Wanngård and Prime Minister Stefan Löfven were among the top names who attended the official opening.

SL said it would “demand immediate action” from the company that installed the escalators and added it was working to reopen the stations “with running escalators as soon as possible”.

“We can't say today how long this is all going to take,” said Ottosson.

Stockholm City is part of the Swedish capital's main transport hub, connecting both to Stockholm Central and the underground. Friday’s closure does not affect other transport via the Central station (which is however already closed to long-distance trains due to scheduled repairs), or metro stations T-Centralen or Odenplan.

The commuter trains are currently passing Stockholm City and Stockholm Odenplan without stopping. The closest alternative stops are Stockholm Södra (south of City) and Solna (north of Odenplan).

If you need to travel onwards from Stockholm Södra, walk to metro stations Mariatorget (red line) or Medborgarplatsen (green line) and travel by metro to T-Centralen or your preferred stop.

From Solna, replacement buses will transport passengers from the train station to the metro, where you can take the blue line to central Stockholm.

Members of The Local are able to comment below. Ask your questions there or share your best tips for alternative routes. If you are not yet a Member, click here to join.