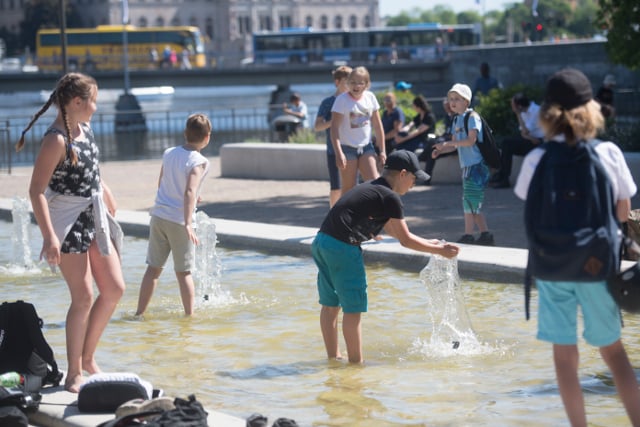 Stockholmers cooling off in a fountain. Photo: Fredrik Sandberg/TT

The warning means that temperatures are expected to reach 30C or more five days in a row.

“It is the first time since 2014 we are issuing this warning,” meteorologist Linus Dock told news agency TT. “You could say it's unusual. It is a relatively new warning category which was developed in 2011.”

While many of The Local's readers may be from countries where such temperatures are par for the course in summer, it is unusual for the mercury to climb – and stay – that high in Sweden.

Uppsala Council said it had made sure that its care homes for the elderly all had air conditioning and fans helping to keep any of its vulnerable residents cool during the heatwave, and Stockholm said it was prepared but had not yet heard of any major incidents connected to the heat.

Authorities did however urge people to respect barbecue bans currently in place in large parts of Sweden, and avoid lighting fires altogether. Nearly all of Sweden is currently considered a risk zone for forest fires, and firefighters have already been called out on several occasions.