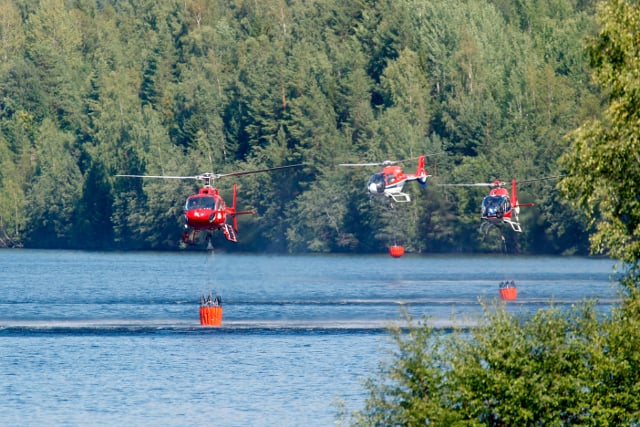 Swedish helicopters carrying water in one of the fire-hit areas. Photo: Mats Andersson/TT

Sweden has been fighting wildfires all summer, and more were reported overnight, including in the Hälsingland region were firefighters have already spent days trying to put out blazes.

Two Italian water bombers – Canadair CL-415 with capacity to carry 6,000 litres of water in one go – are expected to land in Örebro on Wednesday and will be in Sweden for eight days to help put out the flames.

In Ljusdal municipality in Gävleborg county, residents in Enskogen and Ängra have been told to evacuate, and people in surrounding areas should stay inside and close doors and windows. As The Local reported on Monday, firefighters have been forced to evacuate an area in Älvdalen after the blaze spread to a target-practice area where undetonated shells were likely to be present.

Dalarna, Jämtland and Gävleborg counties are the worst affected by the wildfires. At midnight, fire and rescue services in the Jämtland region reported 12 ongoing forest fires in their county.

The latest information in English on the different areas affected by fires can be found on Sweden's national website for emergency information.

Do you live in an area affected by forest fires? E-mail [email protected].