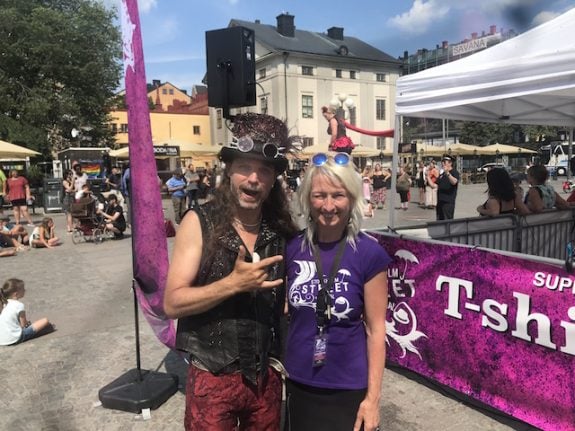 Held annually since 2010, Stockholm Street Festival will this year for the first time embark on a tour around Sweden and Denmark following the three-day Stockholm event.

The festival was first created to make a stand and get the attention of politicians after a street performer was fined 1500 kronor for performing a juggling act on the streets of Stockholm.

“Instead of doing a big protest we created this festival to show the politicians and the citizens of Sweden what they’ll miss if they carried on in this idiotic way,” festival director Thorsten Andreassen told The Local. “And now I think it’s finally touching base that this is art – people are finally beginning to understand it.”

The festival was held in three different locations in Stockholm between July 15th and 18th, with a variety of entertainment including street performances, a circus school and street art. Andreassen said he hopes to encourage people from all walks of live to get involved, with interactive activities for children alongside the performances.

Performances at the street festival range from a mime artist from Argentina to a hula-hoop dancer from New Zealand; from a man juggling machetes and chainsaws to a living golden fairy statue who sprinkled 'fairy dust' on the audience.

“What’s great about street performance is that it can be enjoyed by anyone, no matter where they come from or what language they speak,” he noted. “The entertainment is conveyed through the visual appearance of the performance, which anyone can understand and appreciate.”

Even a police officer was enticed into the fun as he was spotted attempting to ride a unicycle.

Andreassen personally scouts the artists for the festival from all over the world, and said he was particularly proud of this year's international line-up.

He said the goal of the festival is to enlighten and educate people on street performance, and to persuade them to acknowledge it as an art form in its own right.

“This year we have a very diverse programme which I'm really happy about,” he said. “Street performance is one of the most beautiful art forms on the planet.”

Here are the dates and locations of the Stockholm Street Festival tour this summer: