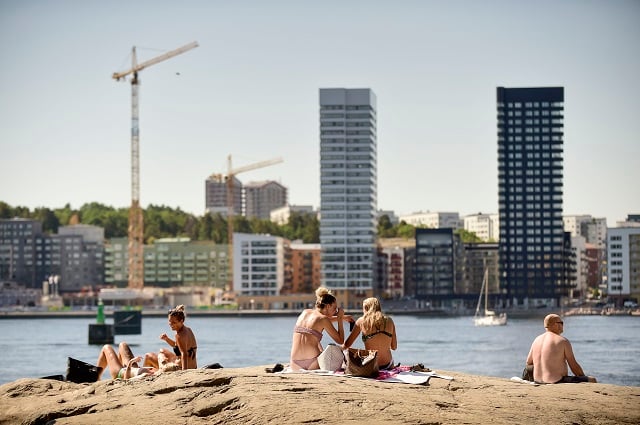 Stockholmers relax on a beach in the south of the capital. Photo: Hossein Salmanzadeh / TT

The average temperature across the entire country was 3-4C hotter than usual, making it the warmest July since records began over 260 years ago — something which weather agency SMHI was able to predict earlier in the month.

The highest ever average July temperature measured at a single weather station was recorded in Stockholm at 22.4C.

“It hasn't been completely uniform; at some weather stations, heat records have survived. But in general we can say we've had real record heat this year,” he continued.

But despite widespread drought, this year's July will not enter the record books as the driest on record, thanks to heavy rainfall over the past few days, with some weather stations recording more rainfall in a single day than they usually see across the whole of July.

The sudden rain was nonetheless welcomed by most people as it helped extinguish the major wildfires that have burned across the country for weeks.

As for whether 2018 claims the title of Sweden's hottest ever summer, that all hangs on how the weather develops in August.

The reason for this is that meteorologists only take June, July and August into account when calculating summer averages, so the extreme heat the country experienced in May won't be factored into the final figure.

Sweden's hottest ever August temperatures were recorded in 1997 and 2002, when the mercury reached levels similar to those of July this year.

Another record that remains unbroken is the hottest ever temperature. Sweden's highest temperature ever – 38C – was recorded in 1933 and 1947, significantly higher than this July's peak of 34.6C in Hästveda, southern Sweden.