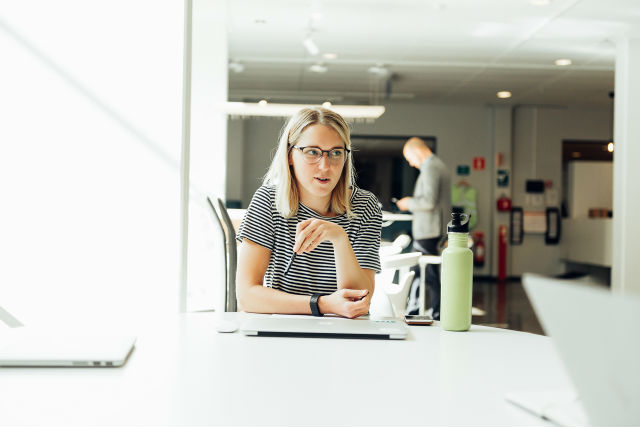 Navigating Swedish workplace culture, a new set of rules and finding your way into water-cooler (or in Sweden, coffee machine) conversations can be overwhelming. The Local spoke with design strategist and project manager Edite Garjane about what she’s learned during her four years working in Sweden.

Edite, who is originally from Latvia, studied journalism in London before moving to Sweden in 2014.

The self-described ‘Scandi-freak’ had only been to Sweden on a day trip before deciding to relocate but was already familiar with Swedish culture, having Swedish friends in London and family members who had worked for Swedish companies while she was growing up.

Protect yourself with unemployment insurance from Akademikernas a-kassa

“I maybe didn’t know as much as I should have before moving somewhere just for work, but I’m also very proud of moving alone,” she says.

She quickly landed an internship in Gothenburg which two months later turned into a full-time job. Since then, Edite has picked up a few pointers about working in Sweden that she thinks can help other newcomers to settle into their Swedish workplaces.

1. There is a lot of bureaucracy

Edite says she struggled to get used to the slower pace of decision making due to bureaucracy when she came to Sweden.

“I didn’t expect it to be so difficult. In the UK, where I lived before, it was so much more straightforward.”

She explains that she quickly understood Sweden could be slower than other countries when it came to getting even a simple ‘yes’ or ‘no’. And once the decision has been made, there are still steps that can slow down the process.

“I’d say people have to calculate more here because there is a lot of paperwork for every decision that you make. I understand that now but at first that was something that I found was really hard to deal with,” she recalls.

After four years of working in Sweden, Edite sees the merits of a more drawn out decision-making process (even if, she says, it can sometimes be mildly frustrating).

“When you’ve gone through that process, you realise there is a system and it works.”

2. Make sure you’re protected with a-kassa

Edite quickly discovered that a fundamental part of working life in Sweden is joining an arbetslöshetskassa (a-kassa for short). The unemployment funds are a sort of financial safety blanket, protecting you if you suddenly find yourself out of work.

There are different unemployment funds depending on your educational background and profession. Edite joined Akademikernas a-kassa which is specifically for people who are university educated. For a small monthly fee, the fund could pay out 80 per cent of your previous salary if you become unemployed.

She says the culture is different in her home country where there is no a-kassa equivalent.

“It was initially a bit of a strange thing to be part of something when you don’t know if you’re going to use it, but I am now part of Akademikernas a-kassa.”

Although being a member of an a-kassa is new to Edite, she appreciates the protection she has if she becomes unemployed. It’s also reassuring to know that she can fall back on it even if she is the one who decides to leave her job and rethink her career.

“I don’t know if I will need to use it but it’s that security that if things do go wrong and I can’t figure things out in time, then I know that there is help available. When I was growing up, I never expected to have this type of safety.”

3. The hierarchies are flat

Edite was pleasantly surprised with the amount of respect she was shown as a new graduate who was just starting out in the workforce and the industry.

“Everyone was so open and willing to give me responsibility. I was given chances very early on and trusted,” she recalls.

Protect yourself in the workforce with insurance from Akademikernas a-kassa

“That comes from the culture and ethics in general in Sweden; the idea that everyone’s voice should be heard. It doesn’t matter if you’ve been there for 10 years or if you’ve just joined, no one looks down on you.”

Edite says her expectations about how she should be treated as an employee have grown immensely and are a result of her managers’ willingness to listen and remain open to suggestions and solutions.

“People are really up for including you in meetings but you also need to be very proactive and ask for what you want,” she says.

4. It is a nation of hard workers

Edite says one of the biggest surprises upon landing her first job in Sweden was how hard everybody works.

“Maybe it sounds weird that I was so surprised, but the stereotype is that bigger, more traditional companies never work later than 5 o’clock and there’s so much time when they’re not at work because they’re at home with their kids.”

Her preconceptions were shattered when she started work in Sweden and saw how dedicated the Swedes are to the task at hand.

“After living and working in Sweden for a while I’ve seen how hard working they are as a nation. They’ve got a very high work ethic,” she praises.

5. Socialising can be difficult

Edite stresses that it’s not all work and no play in the Swedish workplace but that she initially struggled to break the ice with her colleagues.

“Swedes are super nice but when it comes to your life outside of work, once people are a bit older, their time outside of work will be spent with their family,” she explains.

“I was 22 or 23 and at my workplace, there were a lot of older people so it was hard to get that social aspect up and running. Thankfully, I made some friends outside of work but that can be very difficult at first,” she adds.

Edite’s social circle has grown the longer she has spent in Sweden.

“One thing that I have learnt about Swedes is that it is hard to break that shell but once you break it, you’re in and you’re friends for life,” she explains.

Feel safe and secure with unemployment insurance from Akademikernas a-kassa

Edite believes learning Swedish is not necessary but it is important if you want to feel truly included.

“Even if people don’t mean it, it’s very natural that you’re left out of some discussions but those small things really matter. I learnt pretty quickly that to feel included at work you have to step up your Swedish game. It’s so much easier to feel part of something once you know the language.”

Although an important aspect, language learning doesn’t top Edite’s list of things to know about working in Sweden. The number one spot goes to something a little more unusual but not at all surprising.

“You’re really out of the game if you don’t drink coffee, probably even more so than the language aspect. There’s such a huge culture around it. Some people plan their whole work day around coffee breaks, so now I drink coffee again!” she laughs.

Make sure you’re protected in the Swedish workforce. For more information check out Akademikernas a-kassa.