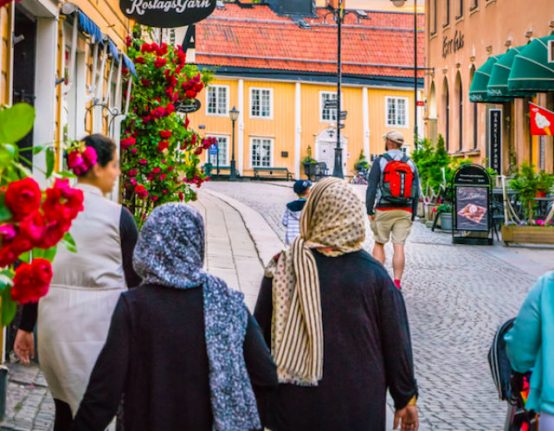 Stockholm is booming. Population and employment are on the rise with consistently positive figures reported each quarter in Stockholm Business Region’s economy report.

With the stream of anti-immigrant rhetoric of late, it’s easy to overlook the role of foreigners in Stockholm’s success. In actual fact, migration has always played a positive role in economic and social growth and nowhere more so than in Sweden’s capital.

“Most people who come here bring talent. We are completely dependent on foreigners and Stockholm wouldn’t be the city it is today without them,” says Ingela Lindh, Chief Executive for Stockholm City.

READ MORE: Can Stockholm survive its ‘third wave of growth’?

Lindh explains that Stockholm has always been a city that is dependent on migration and the participation of Stockholmers both old and new is pivotal to its growth.

“There’s no such thing for a city to stand still. You can never say ‘We are finished, no-one else should move here’ because then you will go backwards. The only way is forward.”

For Alper Aydemir, originally from Turkey, Stockholm is where the heart is.

“I grew up in Istanbul but when the plane lands in Stockholm that’s when I feel like I’ve come home,” he says.

It’s also home to Alper’s business, 3D scanning startup Volumental, which he established along with his three co-founders in 2012. The company now employs 35 people from 18 different nationalities and has a presence in around 1,000 stores globally.

“Our product is like an ambassador for Stockholm. When people see it in Hong Kong or Tokyo or New York, they get excited and research the people making it.”

Alper (pictured right) first arrived in Sweden some ten years ago, when he moved to Stockholm to pursue a PhD in Robotics and AI at KTH. It wasn’t long before his PhD project, which involved 3D scanning and computer vision, began to garner its fair share of international attention.

“It became quite popular and was featured in publications around the world like WIRED and BBC. It was around that time we started thinking about commercialising it,” he recalls.

Before Alper was able to take the next steps in Stockholm, he was contacted by NASA and asked to move to California to start work on a project with Google. Reluctant to pass up the opportunity of a lifetime, he packed his bags and headed to Silicon Valley to work on a product that would become Google’s AR/VR headset.

After nearly two years living in the States, Alper found himself at a crossroads.

“There came this decision point about whether I wanted to stay in the US and work on projects like driverless cars, which a lot of my colleagues went onto do, or start my own company.”

Ultimately, Alper chose to move back to Stockholm rather than stay in what he describes as “the traditional Silicon Valley tech world.” He explains that Stockholm’s smaller size and more open business community meant he had easier access to people who could help him to get Volumental off the ground.

“When you’re in London or Silicon Valley, there’s so much noise and there are so many layers between you and the person you want to speak to. But here people are more receptive and just a phone call away.”

Using the technology that Alper and his co-founder Rasmus initially developed during their PhD, Volumental uses groundbreaking 3D scanning technology to provide data for product recommendations and customised products.

Six years after launching, the company continues to put Stockholm on the map as a vanguard in the 3D scanning field as well as attracting a bevy of international talent.

It’s also become a stepping stone for that talent to go on and put their own stamp on Stockholm.

“One of the things I’m most proud of is that Volumental acts almost like a school for people. When these people leave the company and go onto do their own thing they contribute to Stockholm’s startup ecosystem,” Alper tells The Local.

Stockholm’s future growth is a cause that’s close to Alper’s heart and one he takes quite personally.

“I definitely feel invested in Stockholm’s recognition in the world. I get quite annoyed when it isn’t mentioned in a key statistic or a similar sized country outdoes us. Switzerland is my nemesis!” he jokes.

Changers Hub co-founder Fares Hamed has always felt a sense of responsibility for his local community.

“When I was young I was always the one who was trying to guide my friends towards a more constructive future,” says the entrepreneurial 25-year-old.

Fares was born in southern Sweden to Eritrean parents and raised in Botkyrka, a municipality in Stockholm County that is home to many people with foreign backgrounds. He was still a teenager when he began organising sports tournaments to engage local people in Stockholm’s immigrant-dominated suburbs.

“It quickly developed to helping out the local council. They saw the work I was doing and that I could reach a target group that they couldn’t. So we started to work together and I helped them with different questions. From there we developed Changers Hub.”

Now in its third year, the non-profit organisation provides young adults with the tools and networks they need to turn their ideas into businesses. Through mentorship and accessible resources, Fares hopes to democratise success for all Stockholmers regardless of their background.

“We have a word in Swedish called startsträcka, it’s the take-off distance before the starting line of a race. A lot of people of people don't have it but in our reality, the people living in the suburbs start way behind the starting line.”

He explains that Stockholm, which last year was named the second-best performing city in Europe when it comes to offering opportunities for prosperity, is just thirty minutes by train from suburbs like Botkyrka, but for those living there it may as well be on another planet.

“People living in the suburbs don’t feel like the resources or networks within central are meant for them. We decided to create a safe space where regardless who you are, where you were born or who your parents are, as soon as you step in the space the odds are evened out.”

Since its founding in late 2015, Changers Hub has grown fast. It now has over 1,000 members and has expanded from one premises to two. It has been integral in helping many young Stockholmers launch their own ventures such as the mobile app Challenge Now and the non-profit association Unity and Cultivation.

“I feel like this idea is for everyone,” Fares tells The Local. “I just need to establish it within all the suburbs, then hopefully, at some point in the coming years, there won’t be a difference between the suburbs and the central parts of Stockholm.”

He believes that foreigners have a vital role to play in the city’s future growth. It’s their differences, he says, that will make their contributions stronger and more diverse.

“The world is much bigger than just Sweden. We need to see our cultural differences as an advantage. With Changers Hub, we hope to ease the path for coming generations.”