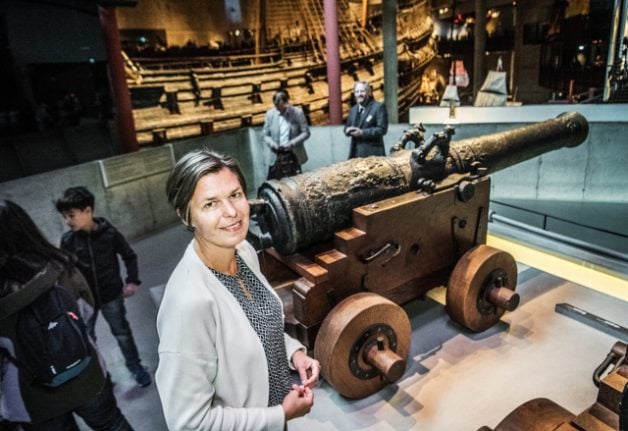 Lisa Månsson, head of the Vasa Museum, in front of one of the ship's guns. Photo: Tomas Oneborg/SvD/TT

The Vasa Ship went down in central Stockholm in 1628, just around 15 minutes after sailing off for the first time. She was salvaged in the 1960s and turned into Sweden's most popular museum.

The would-be warship had 64 cannons on board, three of which can be seen in the museum in Stockholm. A total of 59 of the cannons were recovered in the 1660s, but some still remain unaccounted for.

But one of them may now have been unearthed, thanks to a high-tech sonar search of the area.

“It's an incredible find,” rear admiral Leif Nylander of the Friends of the Vasa Museum, the group in charge of the project, told newspaper Svenska Dagbladet. “The Vasa is a unique 17th-century ship and it's sensational that we can add new discoveries. This will have a ripple effect worldwide.”

Catrin Rising, a communication officer for the Vasa Museum, said it was not yet possible to reveal anything in much detail about the find, or confirm that it is indeed one of the Vasa's missing cannons.

“All we can say is that the find is interesting enough to warrant further investigation. So that's exactly what's going to happen next: we are going to examine it further,” she told The Local. The technical equipment for the sonar search has been supplied by Robert Wilson Marine Technologies. Photo: Magnus Hjalmarson Neideman/SvD/TT

Historic vessels are a fascinating, but not unusual, discovery in the Swedish capital's shipwreck graveyard. Just last year a four-century-old flagship believed to have belonged to King Gustav II Adolf of Sweden was found during the renovation of the quayside on the Skeppsholmen islet.

Many of the wrecks were sunk deliberately when they were no longer needed, but the Vasa's fate was somewhat more attention-grabbing: it sank in front of hundreds, or even thousands, of onlookers in the Stockholm harbour as it took off on its maiden voyage on August 10th, 1628.

The warship, built on the orders of the above-mentioned King Gustav, sunk as a result of being top-heavy, making it fatally unstable. It had just travelled some 1,300 metres when it began to take in water.

The ship was salvaged, with a largely intact hull, in 1961 and was installed in the Vasa Museum in 1988. It is one of Sweden's most famous tourist attractions, with almost 1.5 million visitors last year.