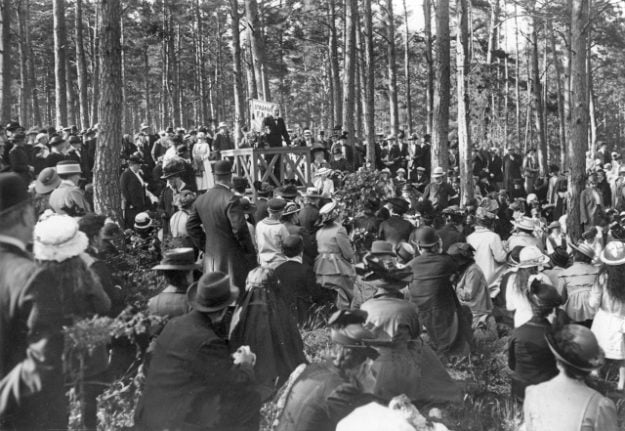 A women's suffrage rally in Strängnäs, Sweden, in 1916. Photo: TT

Less than a century ago, in September 1921, Swedish women voted for the first time in a national election. Though they had waited two years since becoming fully enfranchised in 1919, the real struggle had been overcoming the voting regulations that Swedish political scientist Torbjörn Vallinder described as “among the most undemocratic in Europe”.

Swedish women had technically held the same rights to vote in municipal elections as men since 1862, thanks to the gender-neutral terminology of the law. For both men and women, however, this right was limited to those who owned and paid taxes on property at a certain level. Since legal restrictions on women's property rights meant that far fewer women than men met this requirement, the reality was that only a small number of women could actually vote at the local level.

The result was that while women in the United Kingdom and the United States were actively campaigning for suffrage in the 1860s, Swedish women were focused on other issues, including changing the laws that kept them from owning and controlling their own properties and income. The first women's rights organization in Sweden, the Association for Married Women's Rights to Ownership (Föreningen för gift kvinnas äganderätt), was founded in 1873, with this cause at the top of its agenda.

READ ALSO: How to vote in the 2018 Swedish election A demonstration for universal suffrage in Stockholm in 1906. Photo: Pressens Bild/TT

More than a decade later, in 1884, an early motion for national women's suffrage was presented in the Riksdag (Swedish parliament) by Fredrik Borg, a liberal politician. Although women had no representation in national politics, the motion was rejected on the basis that women themselves had not asked for the right.

As fallacious as this argument was, women's rights organizations were in fact still focusing their attention elsewhere. Even the Fredrika Bremer Association (Fredrika Bremer Förbundet), which was founded in 1884 and is today Sweden's oldest women's rights organization, did not specifically advocate for women's national suffrage until the very end of the 19th century.

As Swedish historian Josefin Rönnbäck has written, “The organized movement for [women's] franchise in Sweden began almost half a century later than those in Britain and the United States, and it developed in much shorter time.”

Ask and you shall not receive

In 1899, 15 years after the first motion for national women's suffrage was rejected in the Riksdag on the premise that women had not asked for it themselves, Agda Montelius and Gertrud Adelborg presented Sweden's conservative prime minister, Erik Gustaf Boström, with just such a petition. The two women represented the Fredrika Bremer Association, which had merged with the Association for Married Women's Rights to Ownership in 1896, and had since set its sights on obtaining national suffrage for women.

The petition was pointedly ignored.

Once again, the cause was taken up in the Riksdag by a liberal politician, Carl Lindhagen, who in 1902 proposed an investigation into women's suffrage on par with men's. The same year, another proposal was made by conservative Minister of Justice Hjalmar Hammarskjöld, who suggested that the suffrage issue could be addressed by giving men two votes – one for him and one for his wife.

Understandably, the second proposal did not go down very well with women's suffrage advocates.

The events of 1902 prompted the establishment of the Swedish National Association for Women's Suffrage (Landsföreningen för kvinnans politiska rösträtt, or LKPR). Founded by women with both conservative and liberal political leanings, it drew support and collaboration from members of other groups, including the Fredrika Bremer Association. LKPR quickly became a driving force in educating and mobilizing women, developing political alliances in Sweden, and interacting with international suffrage organizations.

In 1905, these efforts led to LKPR proposing women's national suffrage to the liberal prime minister, Karl Staaf. The official response, that men's voting rights must first be made universal (i.e. not determined by factors like income), was followed in 1906 by the creation of a parliamentary committee that would “investigate” women's suffrage. The unfortunate consequence of this, was that it “…took women's universal suffrage partly off the agenda, since core actors could refer to 'ongoing investigation' as an answer to demands,” explained University of Gothenburg Professor Lena Wängnerud in the 2012 book, The Struggle for Female Suffrage in Europe. Meanwhile, the Swedish women's suffrage movement continued in high gear, though not without internal conflict and division.

On the one side, the goal of the organized movement, which was led at the time mainly by middle and upper class women, was to achieve the same voting rights for women that were held by men, not universal rights for both sexes. This meant that women who paid taxes on property above a certain amount would have the right to vote in national elections, just as they already could in municipal elections. Such a reform would therefore only enfranchise a small percentage of women, and keep much of the rest of the population – male and female alike – without any voting rights.

On the other side, according to Rönnbäck, “This choice was not appreciated by social democratic women in Sweden, and the international socialist congress urged its members to distance themselves from movements whose programmes lacked the question of general suffrage.” For this group of women, “Striving for franchise under the same conditions as men signalled that the current class order was accepted and that certain people were excluded due to low income.”

Even after the introduction of universal male suffrage in Sweden, voting rights continued to be restricted in other ways that primarily affected the working classes. Despite these constraints, in the 1911 general election, a new group of male voters helped to replace the conservative government with a liberal one. Within a year, under liberal Prime Minister Karl Staaf (whose previous term as prime minister had lasted less than a year), a bill on women's universal suffrage was submitted in the Riksdag. It was outvoted by the still-powerful conservatives, but a new course had been set.

At the same time, “Swedish feminism [had] developed from an elite concern of the urban upper class into a broad based mobilization which united rural and urban women of all classes in the campaign for suffrage,” explained sociologist Marika Lindholm in a 1991 article in the Journal of Historical Sociology.

Organizations like LKPR and the Fredrika Bremer Association were mobilizing women and increasing their membership through campaigns that educated and empowered women to understand and use their existing rights to gain even greater ones. Between 1904 and 1913, LKPR had grown from 3,650 members to more than 17,000, with 200 branches around the country. In addition, women were becoming increasingly politically-active and -aligned.

“In 1913, women had the possibility of becoming members of any political party organisation,” noted Rönnbäck. “Women were united already in the struggle for franchise, establishing their own party political bodies, like Moderata kvinnor ('Conservative Women'), Frisinnade kvinnor ('Liberal Women') and Socialdemokratiska kvinnokongressen ('The Social Democratic Women's Congress'), at the side of the men's party political organizations.”

READ ALSO: The migration crisis that divided Sweden and made it a better country Women and men voting in the national election in 1928. Photo: Pressens Bild/TT

As the democratization process unfolded in Sweden, the issue of women's suffrage became increasingly important to the Liberal and Social Democratic parties. The support the issue had received from individual politicians in the late 19th century became, in the early 20th century, part of an alliance of sorts with the Social Democrats. Both sides recognized they needed the cooperation of the other to achieve their goals.

“The Labor movement's success can be partially attributed to its ability to coalesce with other reforming elements of Swedish society – including feminists,” explained Dr. Lindholm. “Since the right to vote was critical in expanding their influence, the Social Democrats gained political support from many quarters by working to extend the franchise.”

For the women's suffrage movement, this culminated in 1919, when the Liberal-Social Democrat coalition government led by Prime Minister Nils Edén introduced legislation in the Riksdag that would not only grant women universal suffrage, but also eliminate income-graded voting – a major inequity in voting rights for both men and women. The motion passed even among opposition conservatives due to fear that revolutionary activities taking place in other parts of Europe would occur in Sweden if women's and workers' rights were not addressed.

So it was that, somewhat reluctantly, on 24 May 1919, Sweden became the last of the Scandinavian countries to grant women universal suffrage.

When Swedish women finally had the chance to vote in the 1921 general election, they made good use of their right. Nearly 50 percent of eligible women turned out for the election, which resulted in five women – representing the Liberal, Conservative, and Social Democratic parties – entering the Riksdag. One of these, Kerstin Hesselgren, was elected to the Upper Chamber, while the other four – Nelly Thüring, Agda Östlund, Elisabeth Tamm and Bertha Wellin – were elected to the Lower Chamber.

These five women represented the end of one era and the beginning of another in Swedish history.

For more information and a wealth of resources on this history, visit The University of Gothenburg's online portal, Swedish Women's Struggle for Suffrage.