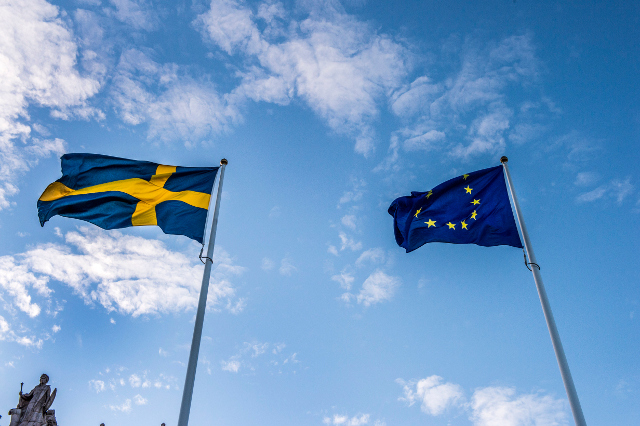 Sweden has been an EU member since 1994. Photo: Lars Pehrsson/SvD/TT

What are you planning on doing in the next four years to fight for or against a “Swexit”?

“The Social Democrats care about EU membership and feel that it is obvious that Sweden should continue to be an active player in the EU. We are convinced that it is good for Sweden to be a member of the EU, and good for the EU that Sweden is a member. There is also strong public support for Swedish EU membership. By working for a stronger and better EU, closer to the citizens, that prioritizes the key issues where EU collaboration offers a clear added value, we can continue to benefit from membership.” “The Moderates say no to Swexit – Sweden's membership of the EU is crucial for Swedish jobs and for our prosperity. Sweden should pursue an active European policy that promotes Swedish interests. We believe that the EU should focus on solving those issues that require common solutions, for example the climate challenge, migration policy and cross-border crime.” “We oppose the development which means that too much power has been moved from Swedish legislators to decision makers and bureaucrats in the EU. We therefore want to renegotiate the treaties to make the cooperation with the EU more about the freedom of movement on the internal market and return a lot of the other things to the member states to decide on themselves. In addition, a lot of the EU decision processes need to be democratized. After that, we want the Swedish people to vote on (Sweden’s) EU membership.” “The Swedish Green Party wants Sweden to play a constructive, forward-looking role as an EU member state. We believe the EU can and should be at the global forefront in combating climate change, supporting sustainable fisheries, introducing stricter environmental and chemicals regulations and continuing the transition towards clean and renewable energy sources. We work hard within the EU institutions to move the whole of the EU to adopt a more humane migration policy, establishing safe legal pathways for migrants to enter Europe.”

“The position of the Swedish Green Party is that Sweden should remain an active EU member state, and a majority of Swedes are in favour of Sweden remaining a member of the European Union. However, there are a number of deficiencies in the EU’s current organization and mode of operation which we see as being in need of change in order to foster a more democratic, better-working and sustainable EU. Among these are the democratic deficit, the CAP, and the need for more robust lobbying regulations to enhance transparency and equal democratic access and a greater focus on climate change and how it impacts all aspects of EU policy making.” “The EU is probably needed more than ever right now, and we want Sweden to remain a member. It’s crucial for our economy, but also for our influence on issues like climate, security and trade policies. We also believe that the EU is built on fundamental values of freedom, democracy and an openness that needs to be protected. That’s why these values, and the battle against populism, extremism and xenophobia are central in our election campaign. We will continue to fight for this and stand up for our values. We will also continue to push for the EU to deal with the problems in society that people experience on a daily basis.” “The Left Party opposes Sweden’s EU membership, but we’re not working actively for an exit. We oppose the supranational power and the market focused policies that dominate the bloc and which put company profits ahead of, for example, environmental issues and working conditions. It is clear that the EU can’t handle the great challenges that Europe is facing. This is why we want to see another, more intergovernmental, form of cooperation within Europe.” “Working against a Swexit is one of the Liberals' most important issues in this election campaign. It is worrying that after Sunday's election one third of MPs (Sweden Democrats and Left Party) might actually be in favour of Sweden exiting the EU. A Swexit would make Sweden poorer both economically and culturally. A total of 150,000 jobs would be directly threatened and Sweden would become an isolated corner of Europe. The Liberals are actively working to explain why the EU is important and why an exit would be devastating. In a Europe where extreme winds are blowing, the Liberal voice must never fall silent.” “The Christian Democrats support Sweden’s EU membership. The predecessors of the EU were created in the 1950s so that countries that had previously been at war with one another could stay at peace, strengthen democracy and create welfare together. These fundamental values are also important in our time. For the Christian Democrats, it’s important that the EU is used in the right way – that cross-border challenges are solved together, that decisions are made in the best, suitable manner and that differences are respected within the cooperation.”