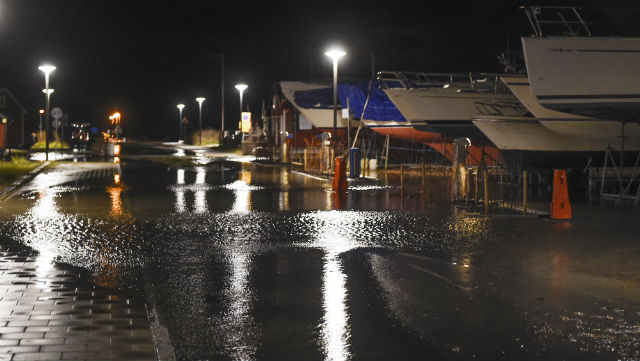 The boat in Skanör flooded last year in January. Photo: Björn Lindgren/TT
Pär Holmgren, a former TV weatherman who works for the Länsförsäkringar insurance cooperative, told The Local that his critics among Skåne’s coastal municipalities were failing to face up the risks.
“No matter what people want, this will happen. It has become warmer, the ice will melt, and the sea levels will rise, and you can’t negotiate about that,” he said. “You can’t negotiate with Mother Nature and the physical law.”
The mayors of six coastal settlements in Skåne — Kävlinge, Ystad, Simrishamn, Trelleborg, Vellinge and Båstad — at the start of this month released a joint statement attacking both Länsförsäkringar’s recommendations, and the Skåne Regional government’s guideline that building permission be denied to buildings less than three metres above sea level.
Carina Wutzler, the mayor of Vellinge, which includes the wealthy coastal towns of Skanör and Falsterbo, said that the recommendations were holding her municipality back.
“Other countries have shown that it is possible to handle the risk of flooding,” she told the Sydsvenskan newspaper. “We would rather that the regional government supported the municipality instead of stifling development and only seeing problems.”
Länsförsäkringar, an umbrella organization for Sweden’s 23 regional insurance cooperatives, on Thursday issued a press release explaining it recommendations.
“Our assessment is that natural damage will grow so large that certain events, such as flood damage, in several coastal areas can no longer be considered “unforeseen”, which is a fundamental requirement for insurance to be issued,” wrote the organization’s press spokesman Cecilia Winter.
She explained that this was the reason why the organization had issued guidelines for the group, including Länsförsäkringar Skåne, not to insure planned new buildings in areas where the Skåne Regional Council had recommended no construction should take place, even if the local municipality had overruled the decision.
Holmgren said that he was convinced that other insurance companies would soon follow Länsförsäkringar’s example and recommend that buildings in exposed coastal areas should not be insured .
“The only reason that they can maybe question our judgement is the fact that we are the first insurance company that has a recommendation,” he said. “But I’m sure that the other insurance companies will act the same way as we do.”