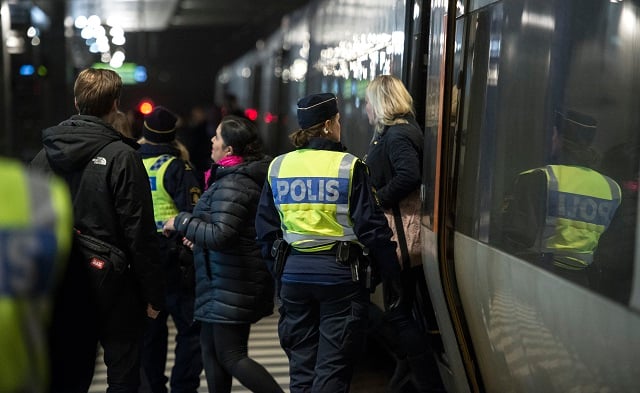 Police prepare to board a train in Skåne to carry out border controls. Photo: Johan Nilsson/TT

The inspectors behind the report claim that Sweden's controls are poorly manned, and have also criticized working methods and the education levels of those carrying out the checks.

One specific criticism was that Malmö airport staff had insufficient knowledge of counterfeit documents, according to a report in Expressen, which also highlighted instances of people being detained upon arrival in Sweden even though they were there legally, due to a lack of staff training and understanding of the law.

The situation is so bad that the inspectors suggested bringing in Frontex, the EU border control authority, to assist Sweden as it has done in Greece, and said the situation in Skåne was such that border police “cannot protect society”, Expressen reported.

“The findings of the evaluation are concerning. Police authorities have therefore intensified their work with other responsible authorities in order for Sweden as a country to be able to meet the demands of Schengen cooperation,” Patrik Engström, head of the police's border unit, said in a written statement.

In the same statement, Engström admitted that the report's conclusions were already “well known” to police, who have already begun working on measures to tackle the issues raised.

“Our goal, naturally, is for Sweden to live up to the EU standard. At the same time, Sweden has major challenges with our long-term borders and the new refugee situation that has arisen in Europe since 2015. This change will therefore take time,” he said, referring to the high levels of displaced people who arrived in Sweden between 2015 and 2016, prompting the government to tighten border controls.

Engström also praised border officers for doing “the best job as possible in the existing conditions”.

The evaluation took place in spring and summer 2017, but will only be made public when the report is adopted by the EU Commission, which has not yet happened. All member states within the Schengen area undergo audits of this kind at least once every five years.