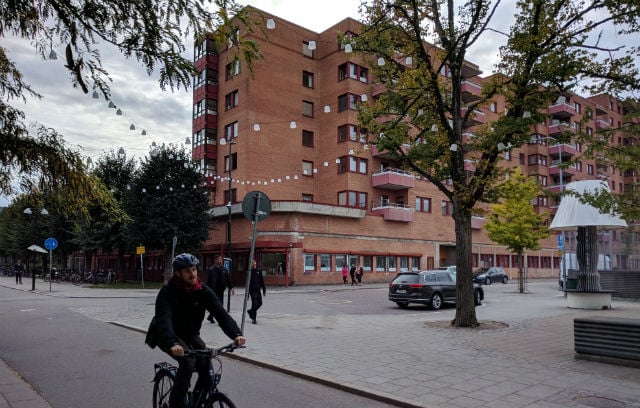 The seven-story building outside Malmö's Folkets Park has been used by drug dealers as a hiding place. Photo: Richard Orange
This isn't one of Sweden's “especially vulnerable areas”, but the street bordering Folkets Park, one of central Malmö's most popular amusement spots. It is also less than a hundred metres from the new office building where computer gaming giant Massive Entertainment aims to move.
“The latest thing that happened was only last Wednesday at 4am,” one of the residents of the next-door, seven-story apartment building told The Local. He said he heard screaming, and when he looked out he saw four men dragging another man into a children's playground, where they gave him a beating.
The resident, who moved to Sweden from another European country to be with his Swedish girlfriend, called the police. But by the time they arrived, the group had disappeared.
The apartment block, owned by property company Akelius, first started to see problems after police installed cameras around an area then known by locals as “knarkrondellen“, or ‘the drugs roundabout', at the other corner of the park.
To escape the cameras, the gang occupied this building, storing drugs inside by pushing up panels in the ceilings, and hiding out on a roof terrace used as a playground by the local kindergarten.
When residents went public with the problem, publishing an article in the local Sydsvenskan newspaper, the two men named in the article were beaten in an apparent revenge attack.
“He was going into the building and they just attacked him, and his girlfriend was threatened to be raped,” said the resident, who was himself attacked.
Residents got warnings posted into their mailboxes with printouts of photos taken of them by the drug gangs, and a note in Swedish saying: “Police informants: we are watching you.”
“People felt scared to report them to the police after that,” said another former resident who has since moved out of Sweden, partly because of these experiences.
Freddy Nilsson, the community police officer responsible for the area, told The Local that he understood residents' frustration.
“I completely understand that people sometimes think that the police aren't doing anything, because they can't see all of the things which are happening which are not visible,” he said. “They see a person who is standing there and selling drugs, and they see no police.”
But he said that local police were working “continually to clamp down on selling drugs”, using a combination of surveillance cameras, reports from residents, uniformed officers and plainclothes police patrols.
“We try to work by being visible: we work with having officers there and our patrol car, and, sometimes, depending on what we do, then they move location.”
On Thursday afternoon, three plainclothes officers had taken a group aside, and were questioning them on a set of benches inside the park.
Nilsson said that one of the obstacles police faced was that the dealers were careful never to be caught in possession of large quantities of drugs.
“If we prosecute them for drug crimes, they do not get locked in for particularly long,” he said. “They normally have quite small quantities of drugs on them, which is categorized as a minor offence.”
Others are minors.
“If they're younger people, we contact the Social Services and we file a report, but if they are under the age of 15, they won't get convicted in a trial because they are below the age of criminal responsibility. If they have an addiction problem, we try to help them end their addiction,” explained Nilsson.
One resident of the affected building, a computer games developer from North America, this year took a job back in his home country, partly because of his experiences.
Meanwhile, the anonymous resident said that the group of dealers that had caused the most problems last year appeared to be less active.
“I think they've all been arrested.These guys are all in jail,” he said. “But it's still crazy here, though it's not in our building as much as it was.”