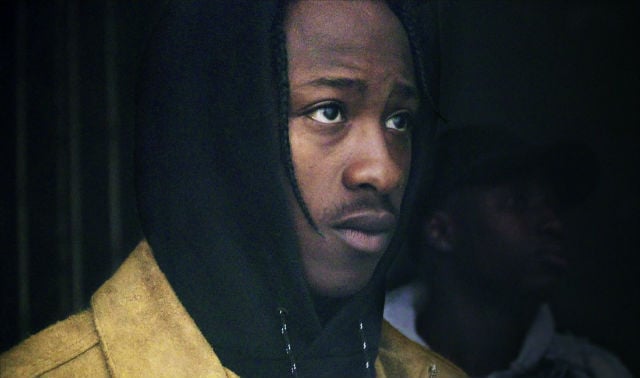 The Malmö rapper Leslie Tay in the official photo for Leslie on Fire. Photo: Stefan Berg
What were you thinking when you first met Leslie, what was the project you were working on?
I was working on another film project called Pojkar (Boys).  It was about one of the headmasters at Sofielundskolan in Malmö. You know Sofielund, it's one of the most segregated areas in Sweden. And suddenly when I was walking around in the school, this charming 14-year-old kid popped up in front of the camera, just like that and introduced himself. That was 2003, 15 years ago, and it was like an instant love story between the camera and the kid. I was behind the camera, like I usually am, and after that I asked the headmaster, 'who was that?' and he said 'that's my favourite. he's called Leslie'. I just thought I had to follow that up and I did an interview with Leslie right away in the school.
Stefan Berg at the Nordisk Panorama Festival. Photo: Richard Orange/The Local
How did the project develop?
I asked him if he wanted to be in a movie about himself, and he said “yes”, with a big smile, he really wanted to do that. And simultaneously with the Boys project, I started up a new project in cooperation with Swedish Television, and they gave me a task to follow him for five years, between 14 and 19, so he was almost a grown-up when I was finished. It was an epic study in a guy's teenage years. Then, at the premier in 2008, when I was walking out of the cinema, I thought that this was some kind of preparation for another film that I'm going to make in the future. What I saw was a combination, to turn back to him when he was a grown-up and use all this huge material, over five years, as an archive material, like flashbacks, to tell a parallel story. The grown-up and the kid, between those two levels.

LESLIE ON FIRE – Trailer from Berg Images on Vimeo.