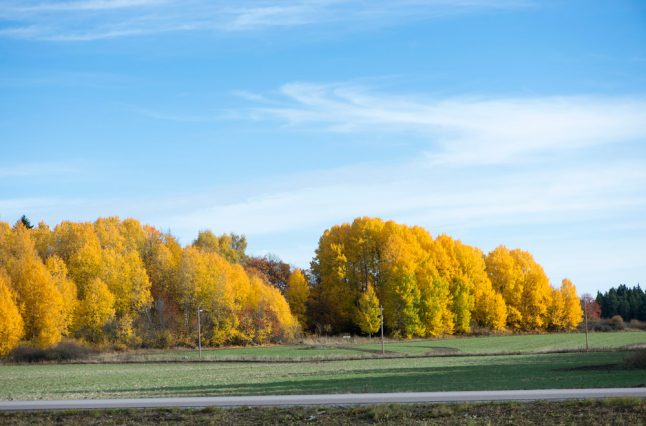 Warm temperatures will accompany the autumn colours. Photo: Fredrik Sandberg/TT
“The whole country will get it,” Alexandra Ohlsson, a meteorologist at national weather agency SMHI, said.
Swedes in the southeastern part of the country were enjoying the higher temperatures already on Saturday.
The arrival of an Indian summer will then spread throughout the rest of the nation – albeit by a different name. Indian summer is known in Swedish as Brittsommar, named after Saint Bridget of Sweden (Swedish: den heliga Birgitta, or Britt for short), whose national day is on Sunday.
“We have hot air that will blow over the country during the day [on Saturday]. There is a chance that we’ll see 17 degrees in the southeastern parts of Götaland,” Ohlsson said.
The high temps will spread throughout Sweden as the work week gets underway, thanks to hot air moving in from the region around Spain, Portugal and northern Africa.
“It can be 14 to 17 degrees in several locations, even warmer in the southernmost parts,” Oholsson said.
The highest temperatures are predicted for Kalmar, the pretty city on Sweden’s south-east coast, where SMHI is calling for highs of 19C on Wednesday.