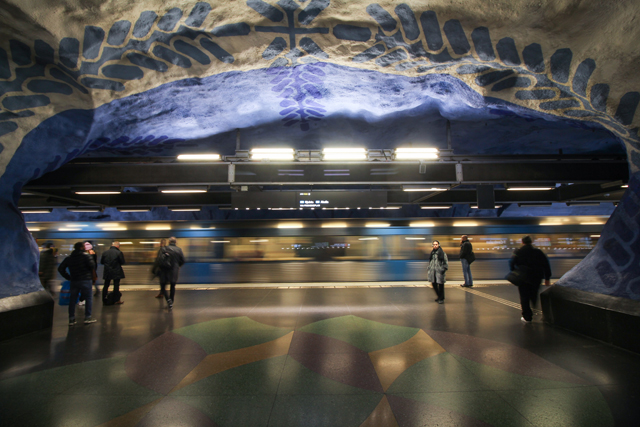 Busy passengers getting ready to board the incoming train. Photo: Nele Schröder/The Local

There are three lines in operation today: the green, red and blue lines. But the detail that makes Stockholm's subway network truly special is the art decorations in 90 of the 100 stations, which have earned the network the nickname “the longest art gallery in the world”.

With that said, let's step inside some of Stockholm's most beautiful and interesting stations.

With all three lines as well as both the commuter trains and long-distance services connected to the station, T-Centralen is the largest and busiest station in Stockholm, used by around 300,000 travellers daily. It was opened in November 1957 under the name of 'Centralen', but had to change its official title just some months later. This was because of confusion between the metro station and Stockholm's central railway station, which went by the same name, so a T for T-Bana was added.

The art at T-Centralen is spectacular, with 17 different artists having worked on the interior between 1957 and 1995. The different floors display different kinds of art: the first floor shows a collection of glass prisms, the second is usually used by changing artists to exhibit their art and the third is known for its cave-like structure and blue-and-white paintings. These show flowers and leaves, but also the builders of the station in detail. The colour scheme is a nod to the blue line, which departs from these platforms. Flowers and leaves in white and blue, by Per Olof Ultvedt. Photo: Nele Schröder/The Local

Another station that had to change its name rather quickly is Hötorget. It was originally opened in October 1952 under the name of Kungsgatan, after the road near the station. The road, though, is over a kilometre long, so the name was soon deemed impractical from an orientational point of view. It was changed to Hötorget in 1957, the name of the square it connects to.

Inside you find some very well-preserved 1950s architecture, designed by Gunnar Lené, who was also involved in some of T-Centralen's interior design. The whole station is covered in turquoise ceramic tiles, which were supposed to give the station an everlasting new look, as they were easy to clean. In 1998, sculptor Gun Gordillo added 103 white neon lights, arranged in lines.

Want to stop at a station that looks like an 80s video game? Say hello to Thorildsplan on the green line. It opened in October 1952 and was actually designed in two rounds: Lars Huck Hultgren designed a wooden sun relief on one of the station's concrete walls in 1975. Several years later, in 2008, Lars Arrhenius followed by arranging colourful tiles into pixelated patterns and figures. These depict popular symbols and characters from traditional computer and arcade games, like Super Mario. Some of Stockholm's subway stations have been built into caves, where the structure has been kept and integrated into the art – like at Kungsträdgården. The station is part of the blue line and located under the park with the same name in Stockholm's Norrmalm district. The station's entrance was originally planned to be in the park in 1971. For that purpose, a number of old elm trees would have needed to be cut down. This sparked a huge protest, now known as the Elm Tree Revolt – and it was successful: the park and trees were spared and the entrance was moved. In October 1977, the station opened its doors to the public.

Artist Ulrik Samuelson designed Kungsträdgården after the old buildings around the stations that were torn down due to a modernization of the city. The art features relics from these buildings, as well as a tree branch representing the Elm Tree Revolt. It's also known for its flora and fauna, with a spider living there that lives nowhere else in Scandinavia and some fungi and moss growing that was previously undiscovered.

From the art to the flora and fauna: Ulrik Samuelson designed Kungsträdgården as a reminder of the place's history. Photo: Nele Schröder/The Local

Located 20.5 metres below sea level, Rådhuset is the fourth deepest metro station in the system. Inside, passengers are once again greeted by a cave-like structure, this time in light brown tones. Added to this colour are playful details from Kungsholmen's history, which is the city part where the station is located. The artwork is by Sigvard Olsson and includes a collection of root vegetables, a chimney foundation, and a 17th-century-inspired portal. Rådhuset is part of the blue line and was inaugurated in 1975.

The artwork in Solna's central station is a history lesson in itself. It consists of a large painting of a forest and some display cases with sculptures inside. Anders Åberg and Karl-Olov Björk depicted issues from 1970s Sweden, such as the depopulation of rural areas, deforestation and environmental movement. The sculptures in particular showcase this by presenting woodcutting machines, a moose and empty houses. The whole scenery takes place under a bright red painted, cave-structured sky that radiates a menacing atmosphere. The artworks were completed in 1975, before Solna Centrum opened in August.

Located in the north of Stockholm, Tensta is an area with a large immigrant population. Artist Helga Henschen took inspiration from their many different cultural backgrounds and created the artwork around the theme 'A Rose for the Immigrants' in 1975. The art includes texts and poems in several languages as well as animals and flowers, like a small group of penguins on the wall. She also arranged 18 paintings in a line that all carry the word 'brotherhood' or 'siblinghood' on them in different colours and languages. Åke Pallarp and Enno Hallek designed this station, which opened in 1973. It's located near Stockholm Stadion and because of that, the artists wanted to make the 1912 Olympics the theme of the artwork, marking the only time that the Olympic Games were held in Stockholm. The station features the official poster and a rainbow, which features the Olympic colours. There are also the logos of different hockey teams across the walls. The station, alongside Tekniska Högskolan, also won the 1973 Kasper Salin Prize (the Swedish architecture award), for its colourfulness, which is believed to represent the impact of inclusion and equality of nations. Åke Pallarp and Enno Hallek are said to have represented the Olympic colours with the rainbow. Photo: Nele Schröder/The Local

This station got its name from the nearby Swedish Royal Institute of Technology and was opened in September 1973. The art inside Tekniska Högskolan is heavily inspired by the four elements and other natural laws, with a strong connection to important scientists. One example is an apple hanging from the ceiling, which represents Sir Isaac Newton and his discovery of gravity. The entrance shows a solar system and shows Galileo Galilei's discovery that the sun is the centre of our solar system. Artist Lennart Mörk used a blueish-grey colour scheme to give the station a very contemporary look.

Another station that can fill your head with knowledge is Universitetet. It's located on the red line and got its name because it leads to Stockholm's university. The artwork came in 1997 and was designed by visual artist Françoise Schein. It shows the UN declaration of human rights, written on multiple ceramic tiles, and also follows the travels and discoveries of Carl Linneaus, a Swedish botanist, physician and zoologist from the 18th century. The station was originally planned to have two entrances, but only one is active due to low traffic. The other one, leading to the Museum of Natural History, is now solely used as an emergency exit.