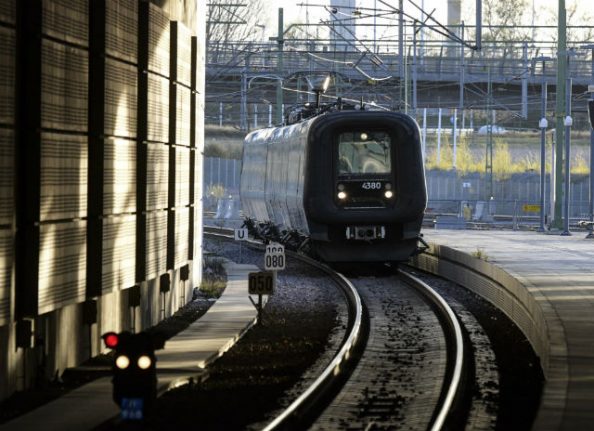 Many commuters complained that the trains were often delayed and dirty. Photo: Johan Nilsson/TT
The regional transport company Skånetrafiken on Tuesday announced that a single ticket from Hyllie in Malmö to Kastrup in Denmark would increase from 100 kronor to 120 kronor, while a monthly pass from Malmö to Copenhagen would increase from 2,000 kronor to 2,195 kronor.
“This is ridiculous!” complained Timo Minssen, who travels from Malmö to teach law at the University of Copenhagen, on the Broenlive Facebook group.  “Greetings from yet another shortened, delayed and completely overcrowded 8pm, commuter-train without wifi or functioning toilets. You rock, Skånetrafiken!”
“The price rise is a disgrace when one takes the dreadful service into account,” Ian Mark Wilson, who used to commute on the route, wrote on the Malmö Expats Facebook page.
Even Malmö mayor Katrin Stjernfeldt Jammeh criticized the decision.
“Journeys over the Öresund Strait should be made cheaper, not more expensive,” she wrote on her Facebook page. “An integrated labour market needs both efficient and cheap transport. This is truly a depressing decision for Öresund commuters.”
A comparison of 103 routes carried out by the International Union of Railways in 2014 found that the route between Hyllie and Copenhagen Airport was the most expensive in Europe, at 2,21 kronor per kilometre.
Skånetrafiken’s chief executive Linus Eriksson told the local Sydsvenskan newspaper that the price increases had come automatically as the deal struck in 2000 between Skånetrafiken and its Danish counterpart DSB leaves the Danish side to set the price, which is then converted to Swedish kronor twice a year at the current exchange rate.
“In addition, DSB have themselves raised the price of a single journey by around two percent, so we must compensate for that,” he said.
Camilla Bunke, head of sales at Skånetrafiken, said that the price increase was the first in five years and had been necessitated by currency fluctuations.
“We share the income from ticket sales fifty-fifty with DSB, and we have to have equal prices with them to harmonise prices over the bridge,” she said. “Since the Danish krone is so high, it's much cheaper to buy the ticket in Sweden. We actually need to increase the prices a little bit more, but we came to this compromise.”
But this explanation seemed to do little to assuage the anger of commuters.
“It’s always the same excuse: the Swedish kronor has become weaker. But when it goes back down to where it normally is, they don’t reduce any prices at all,” complained Muslim Al-Kritty on the Broenlive page.