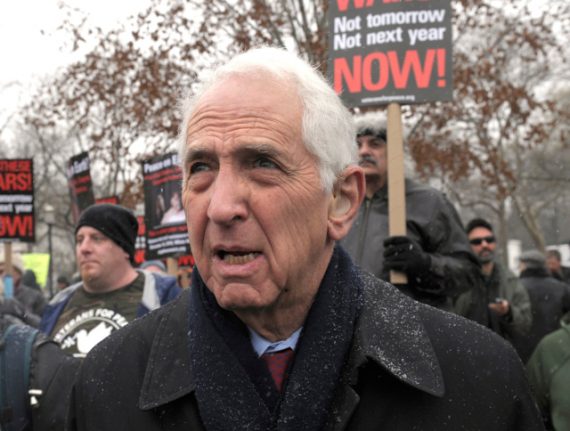 Daniel Ellsberg at a rally in Washington DC in 2010. Photo: AP Photo/Susan Walsh

Ellsberg, born in 1931, is perhaps most known for releasing the Pentagon Papers, a top-secret Pentagon study which revealed that several US administrations had misled the public over the war in Vietnam, to the New York Times and other newspapers.

He was charged with espionage and conspiracy and risked spending years in jail, but the charges were later dismissed.

“Regardless of such consequences, his decision led to the removal of a mendacious government, a shortening of an illegal war, and an untold number of saved lives,” read a statement by the Olof Palme Foundation.

“More than four decades later Daniel Ellsberg again takes on the Pentagon's secret war plans. He warns us of a nuclear holocaust, caused by the refusal of the nine nuclear states to comply with the binding commitment of the Treaty on the Non-Proliferation of Nuclear Weapons to further the goals of a nuclear-free world.”

The Foundation said it would award the prize to Ellsberg at a ceremony on January 30th in Stockholm “for his profound humanism and exceptional moral courage”. The Olof Palme Prize is an annual award worth $100,000 granted by the Swedish labour movement. It commemorates the memory of the Social Democratic prime minister, an outspoken international human rights advocate, who was assassinated in 1986.

Since 1987, the award has been handed out to human rights defenders around the world including former UN Secretary-General Kofi Annan, pro-democracy Chinese activist Xu Youyu and anti-Nazism activists and Holocaust survivors Hédi Fried and Emerich Roth.