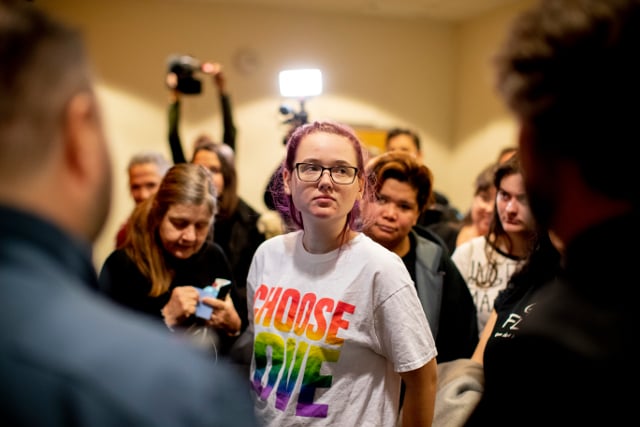 Gothenburg District Court on Monday fined Elin Ersson 3,000 kronor ($325) for her protest on board an aircraft at Landvetter Airport in July last year, according to court documents seen by The Local.

Ersson protested against the Swedish government's policy of not halting deportations to Afghanistan by boarding an Istanbul-bound flight that carried an Afghan man who had been denied asylum, refusing to sit down until he was let off. Flights are not allowed to take off until all passengers are safely in their seats.

She livestreamed her protest on Facebook, where it was viewed over five million times.

Eventually, she was told that the man would be let off the plane and she also disembarked.

The district court found that Ersson had been in violation of Sweden's aviation laws for not immediately following the captain's orders to sit down. It said that even though the orders had been given via the cabin crew and fasten-seatbelts signs, it could be inferred that those orders came from the captain of the aircraft.

The penalty for violation of the Aviation Act is normally a fine or imprisonment for a maximum of six months, but the district court said that the crime was not of a serious enough character to warrant imprisonment.

“In this case, Elin Ersson's actions took place when the plane was on the ground and although it led to palpable concern among other passengers, nothing else has emerged than that the plane was able to take off around half an hour late and continued to Istanbul without further problems,” stated the verdict.

The district court handed Ersson 60 day fines worth 50 kronor each, and ordered her to also pay a standard fee of 800 kronor to Sweden's fund for victims of crime.

Ersson's ticket for the flight had been paid by activist group 'Sittstrejken i Göteborg'. She had originally boarded the plane believing that another person, an Afghan boy, was on board, but when she found out that another Afghan asylum seeker, a man in his 50s, was on the flight she decided to carry on with the protest.

In an interview with Swedish news agency TT in July last year, Ersson was asked how she viewed the fact that her actions might be considered criminal.

Ersson's lawyer said on Monday that they would appeal the conviction.