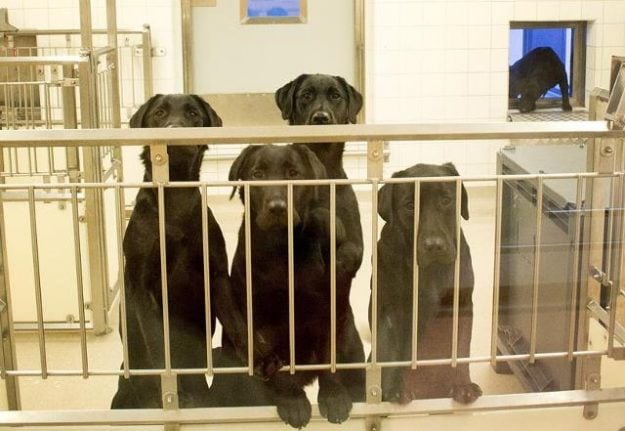 Four labradors who took part in a previous experiment. Photo: Götheborgske Spionen
More than 80,000 people signed a petition led by Sweden's Animal Rights Alliance (Djurrättsalliansen) protesting the use of dogs in the research.
The case has generated a lot of attention internationally since The Local first wrote about it in English, highlighted by celebrity animal rights activists such as comedian Ricky Gervais and the actor Peter Egan.
Anna von Porat, faculty head of communication at Sahlgrenska, said that the dogs, named Venus, Milia, Mimosa, Luna, Lotus and Zuri, had been put down “in the same way as if you brought a pet to a vet”.
“They have been put down because we are taking biopsies and samples and tests, which could not be done on live dogs,” she explained.
READ ALSO: Six dogs to be euthanized in Swedish lab experiment
The university has said it is necessary to use to dogs to study the way the implants fuse with living tissue, because dogs have similar mouth bacteria to humans.
Malin Gustafsson, spokesperson for the Animal Rights Alliance, said the university's refusal to yield to the protests was “not defensible in any way”.
“These dogs could have been able to live their lives. It is impossible to understand and completely unforgivable in all ways,” she said.
“This in no way means that the fight is over. We're just going to keep on going. No other dogs should have to go through something like this.”
The trial, which is continuing, is investigating how a new kind of dental implant integrates into human tissue.
As part of the trial, the six labradors had a third of their teeth removed and then received the implants.
On its website, the university has published an article explaining its decision to use dogs.
“We do understand how animal testing can arouse strong emotions, but we also would like to stress the fact that periodontitis is still a major public health issue, and the research conducted here is crucial to many people,” it wrote.