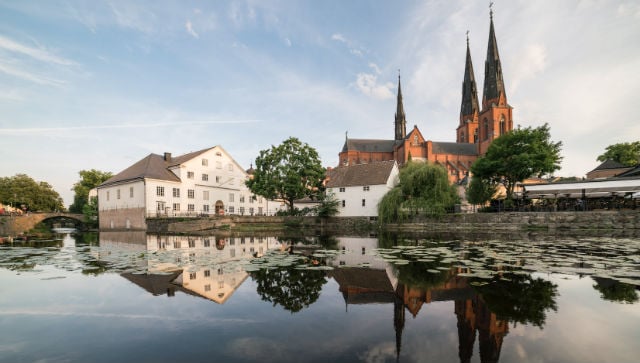 This quaint but cultivated haven is one of Sweden’s most charming destinations. It’s the country’s cultural core, with history, culture and academia galore — much of which is fortunately open to visitors.

The Local took a trip to Sweden’s most climate friendly city to find out why Uppsala deserves a solid couple of days’ exploring. Here’s what we found! It’s the Swedish equivalent of Oxford

Uppsala is home to Sweden’s first university, a prestigious institution with an impeccable international reputation. Founded in 1477, Uppsala University is among the world’s hundred best universities and a dominating presence in the city. Its 13 ‘student nations’ (or unions) are dotted around Uppsala and lively student life buzzes everywhere – the city is cheaper, cheerier and more authentically Swedish than slick Stockholm. Notable Uppsala University alumni include Carl Linnaeus – the naturalist who created the system for classifying and naming nature –  and Anders Celsius – the astronomer who invented the temperature scale. In fact, it was the former who allegedly flipped the latter’s scale to make zero the freezing point (although others have also laid claim to this landmark innovation).

Uppsala still pays homage to both men today — among other attractions dedicated to the scientists, you can visit the Linnaeus Museum, a biographical museum dedicated to the botanist, and see Celsius’s observatory on Svartbäcksgatan in the city centre.

With all that erudition in the air, it’s no surprise that Uppsala is a bibliophile’s dream.

Academia has spilled out of the university and become a big part Uppsala’s character. Consequently, the city has its fair share of bookstores — including the lovely wood-panelled kind that smell like musty old books.

But we bet you didn’t know Uppsala has ‘the world’s best bookstore’! The English Bookshop. Photo: The Local

That’s right. In May 2018, the London Book Fair named The English Bookshop in Uppsala as its International Excellence bookstore of the year. A cultural cornerstone of the city, it’s more than a bookstore — hosting themed events and evenings with famous authors among other literary activities, it’s a product of owners Jan Smedh’s and Christer Valdeson’s passion and well worth a pilgrimage in its own right.

It’s a cultural and historical haven

Uppsala’s lengthy history began in the third and fourth centuries when Gamla Uppsala (‘Old Uppsala’) was an important Norse religious and political centre. If you’ve done your research, you may also know that Uppsala is the site of the famous burial mounds where lie the remains of three sixth century kings. The mounds, and their distinctive hillock shape, are now a symbol of city.

Uppsala has embraced its strong historic profile. There are more museums in the small-ish city than you can shake a cultural stick at.

Don’t miss the Gustavianum where you can learn about different fields of natural science, astronomy and chemistry. Make your way to the dome of the museum to marvel (a little macabrely) at its restored anatomical theatre, built by Swedish scientist Olof Rudbeck, famous for mapping out the lymphatic system. The crown jewel in this fascinating museum is without a doubt the 17th-century Augsburg Art Cabinet given as a gift to King Gustav Adolphus II in 1632. Each side is unique and laboriously decorated with boxes and secret compartments made to house 1,000 small objects that represented the world at the time.

There are plenty more museums and galleries where that came from including Bror Hjorths Hus, a studio museum displaying the Swedish modernist’s art and other temporary exhibitions, and The Museum of Evolution which houses the Nordic countries’ largest collection of dinosaur skeletons.

Bars, pubs, cafes, restaurants — there’s no shortage of great places to refuel (and have a tipple) in Uppsala. And you won’t struggle to find some seriously top-notch restaurants, they’re right in front of you from the moment you step off the train.

The old station house, built in the 1860s, is now home to two restaurants: Stationen and Dryck&Mat, the latter of which specialises in wine, building its menus around the beverage. They’re two of 16 restaurants in the city featured in the White Guide, Sweden’s answer to the Michelin Guide. For a city that’s so easy to stroll around, you can quite literally roll out of one award-winning restaurant and into the next. Of course, there’s fika too. Plenty of fika. For a traditional Swedish coffee break, stop off for a cinnamon bun in Güntherska, a bakery opened in 1887 (then known as Anderssons konditori & damkafé).

It’s no secret that Swedes enjoy nature and in Uppsala you’re never more than a stone’s throw from a green space. In the spring and summer, you can hire canoes and kayaks and go for a paddle on the Uppland canoe trails or Fyrisån river; there are also plenty of recreation areas and exercise trails where you can swim, fish, hike or just sit and enjoy the typically Swedish surroundings.

Uppsala doesn’t shut up shop during the winter. Ice skating paths are ploughed once the lakes have frozen over and nearby Sunnerstaåsen has slopes for skiers and snowboarders.

It’s great for gigs (and an overnight getaway)

If you want to see ‘the next big thing’, it’s likely they’re planning a gig in Uppsala.

Some of the world’s biggest bands (including Black Sabbath before they were known as Black Sabbath) knew that if they wanted to make a name for themselves, Uppsala is the place to do it. Why? They knew the city’s many international inhabitants would be sure to spread the word far and wide. Even Nirvana knew about this small Swedish city — the legendary grunge band scheduled their first international gig in Uppsala (which, unfortunately, was cancelled). Gigs aside, there’s a year-round calendar of events as well as the famous Uppsala Reggae Festival in July.

Cosy up after a jam-packed day in the city at Hotel Villa Anna, a boutique hotel with reasonably-priced rooms and a great restaurant, or discover one of many more great places to stay while discovering this fascinating city.

This article was produced by The Local Creative Studio and sponsored by Destination Uppsala.