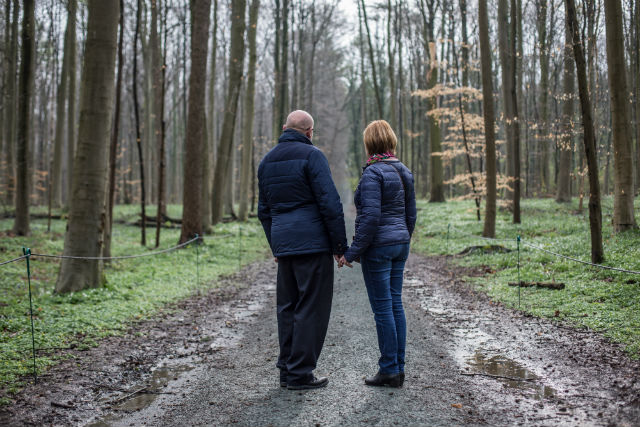 Erik Dereymaeker and his wife Cinta Dereymaeker-Fauville feel let down by Stockholm. Photo: Virginie Nguyen Hoang/TT
“We wake up in the morning thinking of our daughter and when we got to bed, we're still thinking of her,” Erik Dereymaeker told Sweden's TT newswire in his first interview with the Swedish media since losing his daughter Maïlys.
“It's still just a question of surviving. That hasn't changed.”
Maïlys, a 31-year-old psychologist, was visiting friends in Stockholm in April 2017, when she was caught beneath the wheels of the truck hi-jacked by terrorist Rakhmat Akilov, leaving her toddler son without a mother.
Two years on, Dereymaeker and his wife Cinta Dereymaeker-Fauville say they feel that Sweden and Stockholm had not done enough for the relatives of victims.
“We feel abandoned by the Swedish authorities and our insurance company. We are extremely disappointed,” Dereymaeker said.
READ ALSO:
The couple would have liked to visit Stockholm again this month to take part in a memorial service, but there will be no ceremony this year.
“We deeply regret that. So many people are upset. Even if time has passed, it would still help us in our grieving,” he said.  “It would also show that the people of Sweden stand united and do not accept that their society can be attacked in this way.”
Stockholm's city government told the newswire that the city had always intended last year's memorial to be the first and last.
Other cities take a different approach. The Dereymaeker family were last month invited to attend the ceremony in Brussels to mark third anniversary of the 2016 metro and airport bombings that left 32 dead.
And unlike Stockholm, other cities have erected memorial plaques or monuments after suffering terror attacks.  In the first weeks after the attack, a 'memory wall' was set up on Drottninggatan where people were invited to add messages in memory of the victims and in solidarity with their families and Stockholmers, but there is still no clear plan for when a permanent memorial will be put up, although city authorities have said they plan to create one.
“There is nothing in Stockholm. There's no spot for reflection for the families, for the relatives, for passers-by and citizens which says 'we will never forget',” Dereymaeker noted.
By doing so little to mark the event, Dereymaeker said Stockholm gave the impression it didn't care.
“It gives a signal that Sweden does not consider it to be important, either for the country, for the victims, or for the victims' families,” he said.
He was also critical of the court's decision during Akilov's trial to deny a request for special compensation for the victims' families and instead refer them to the company which had insured the truck that was hi-jacked.
“It's as if we weren't victims of a terrorist attack, but of a traffic accident,” he said. The pay-outs given for such accidents in Sweden were also among the lowest in the EU, he complained.
Both parents now suffer from post-traumatic stress, he said, and Sweden had offered them little in the way of help.
“They need to do their homework and help all victims and the families of victims in a better way.”
READ ALSO: The Local interviews the public prosecutor in the Stockholm terror trial