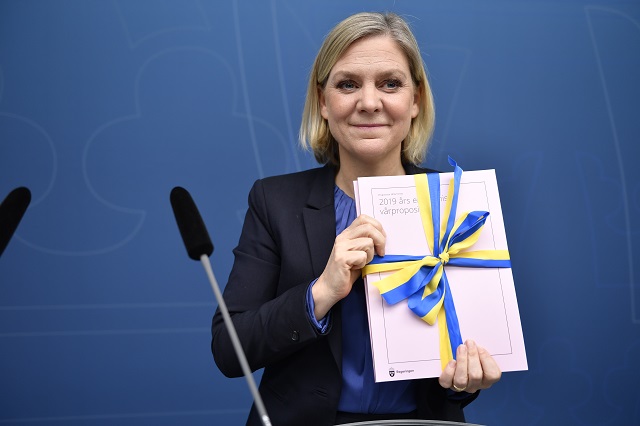 The governing Social Democrats and Green Party have worked with the Centre and Liberal parties on the budget, as agreed in a cross-bloc deal struck back in January.

This means there aren't many surprises in the budget, since the four parties released their 73-point programme earlier in the year. Scope for changes was also reduced by the right-wing budget put forward by the Moderate and Christian Democrat parties in the autumn, which included several tax cuts that left less money available for new reforms.

But there were still a few new announcements on Wednesday, including changes to employer fees and other investments that could directly impact the lives of the Swedish population.

The new reforms add up to a total of 4.5 billion kronor, financed by corresponding tax increases and savings. Here are some of the key points to know, and what they mean for you.

In total, 1.1 million kronor was allocated for increasing the number of people in work.

One useful piece of news for new arrivals in Sweden was the allocation of 45 million kronor to so-called 'new start' jobs. It will no longer be essential for these roles to be covered by collective bargaining agreements, a change intended to make it easier for foreigners to enter the labour market, although the move has been criticized by some as a reduction of workers' rights.

OPINION: Low-paid jobs for foreigners aren't the solution to an unequal labour market Sole traders will now be able to pay reduced employer fees if they hire an employee. Reduced fees were already in place for sole traders, but have been extended from one year to two, at a cost of 120 million kronor.

And one change which is aimed at making it easier for young people to enter the job market is a reduction in employee fees for workers aged between 15-18. The fees for employers on monthly salaries of up to 25,000 kronor for workers in this age category have been cut from 30 percent to only ten percent. The government has set aside 380 million kronor for this change.

Investment in the climate was a key part of the budget announcements on Wednesday.

One of the most exciting pieces of news for keen travellers will be the 50 million kronor investment in facilitating train travel to continental Europe, including investment in night trains.

READ ALSO: Why people in Sweden are breaking a steady trend and travelling less

The government is investing an extra 100 million kronor annually on environmental measures within Swedish industry, with Andersson commenting: “Today, industry accounts for about one third of our  emissions and the goal is that Sweden will not have any net greenhouse gas emissions by 2045.”

The budget also means flight tax would be re-introduced, after being brought in by the previous centre-left government but abolished by the centre-right budget. This was already outlined in the January deal, and although it's unclear whether and how this could directly affect ticket prices, critics have argued it could lead to route closures or relocations by making Sweden a less attractive hub for airlines.

Taxes were also raised on some kinds of heat production, chemical use, and diesel for mining equipment.

The Liberal party in particular has called for investment in education, and the budget included 475 million kronor for hiring more teaching assistants in schools around the country. This is in response to growing concern about increasing class sizes and teachers' workloads.

IN DEPTH: What's behind the rising inequality in Sweden's schools, and can it be fixed? Many of the new investments announced in the budget were possible because of reductions in investments in elderly care as planned under the centre-right autumn budget. This was criticized by the Moderates, Christian Democrats, and Sweden Democrats after the announcement on Wednesday.

But there were significant announcements in other aspects of welfare, accounting for 0.9 million kronor in total.

Also announced was 150 million kronor for disability allowance, available to people with disabilities who need to hire assistants for personal help, and an 11 million kronor boost for Sweden's anti-segregation agency.

The government has proposed that entry to Sweden's 18 state-run museums remains free, something which the conservative parties said they wanted to change in their autumn budget. This accounted for 60 million kronor.

Meanwhile, 100 billion kronor was allocated to the expansion of broadband. And VAT on e-books and digital newspapers was reduced from 25 percent to six percent.

And the budget also included 50 million kronor in so-called incentive grants for cultural schools across the country. This is half of the amount allocated previously under the Social Democrats, but the right-wing budget had proposed scrapping these grants completely.

Money was also allocated to Säpo, Sweden's security police, to strengthen their capability to investigate and prevent extremist crime.

“It is a commitment I really wish we didn't have to make, but we see that violent extremist environments have grown in recent years and terrorism has developed into a serious international problem,” commented Andersson.