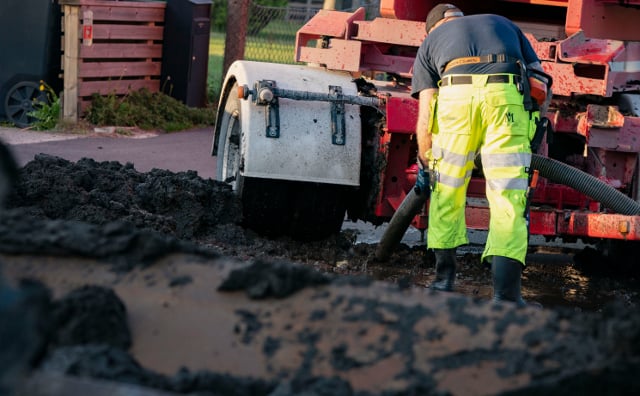 The faeces were spread through the town. Photo: Johan Nilsson/TT
“The back door of a container behind a lorry somehow got loose, so the shit spilled out all along the road,” Daniel Olsson, who led the clean-up operation for the rescue services, told public broadcaster SVT.
Before the driver realized what had happened it had spread along a stretch of road and even splattered onto one of the neighbouring houses.
“What we are talking about, to be exact, is eight tonnes of faeces,” Evelina Olsson, press spokesperson for the police's southern region, told Aftonbladet.
A worker sucks up some of the spilled faeces. Photo: Johan Nilsson/TT
Daniel Olsson told SVT that as the faeces had been part-processed, the unpleasant spill did not represent a significant health risk to those in the area.
“It doesn't smell as terrible as you might expect,” he said, although he added: “You probably shouldn't get it on your fingers.”
Police cordoned off the 118 road through the town of Åhus during the clean-up, which was carried out by the company that owned the vehicle, together with the Swedish Transport Administration, between 6pm and 10pm on Monday.
READ ALSO: Road flooded with 13 tonnes of human waste