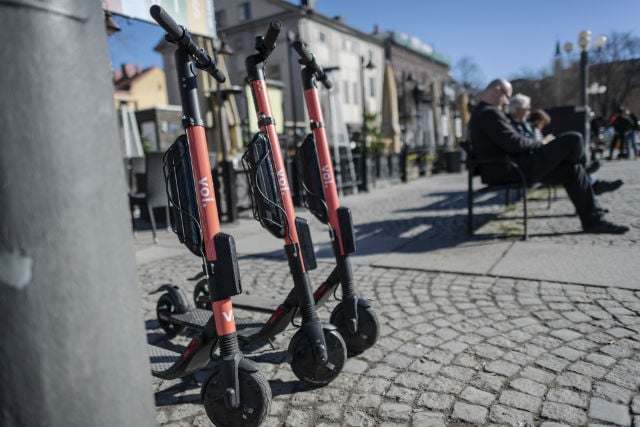 Voi scooters on the Medborgarplatsen square in Stockholm. Photo: Stina Stjernkvist/TT
“This is a vehicle which should not be in traffic,” Hans Cassepierre, an investigator for the agency, told Sweden's TT newswire.
The man was travelling at speed down a hill in Helsingborg late on Thursday evening when he collided with a car. He was rushed to hospital, but died after his arrival.
“We have unfortunately just been waiting for a serious accident to happen, and of course it is even more tragic that someone has died,” Cassepierre said.
Over the last year, e-mobility startups Lime and VOI have dropped thousands of the scooters on the pavements of Stockholm, Gothenburg, Malmö, Uppsala, and Lund, encouraging people to hire them out via their apps.
In Stockholm alone there are now 1,500 of the vehicles and in Malmö there are abound 700. The accident and emergency department at Malmö University Hospital has complained of a steady stream of patients coming in over recent weeks with injuries sustained on the bikes.
Voi, who owned the scooter involved in the accident, released a statement on Friday afternoon.
“We regret the incident and our thoughts go out to the family and friends,” it said. “We can now state that an e-scooter from our fleet was involved. We are cooperating fully with the police in their ongoing investigation to gain a picture of what happened.”
The company said that traffic safety was “an extremely important question for us”, adding that the issue would require both legislation and better communication with those using the scooters and other road-users.
Cassepierre said that the agency had delayed a ruling on the vehicles because of questions over how to define them. They are neither electric bicycles, which are allowed to travel a maximum of 20km/h and require special breaks, or mopeds.
But he said he now believed they should be banned.
“Our judgement is that this is a vehicle which should not be on the road. It is something different. If it is to be used it must meet the regulations for an electric bicycle, and if it doesn't, it should not be used in traffic.”
On their websites, both Voi and Lime tell users to wear a helmet, but Cassepierre pointed out that few of those riding the scooters actually do, and he warned that the vehicles often go faster than their official maximum speed.
He stressed, however, that it was up to the police to decide whether to continue to tolerate the vehicles.
“But it is the companies who are releasing them who need to take responsibility. They should either make sure they meet the regulations for an electric bicycle or they should take their electric scooters off the roads.”