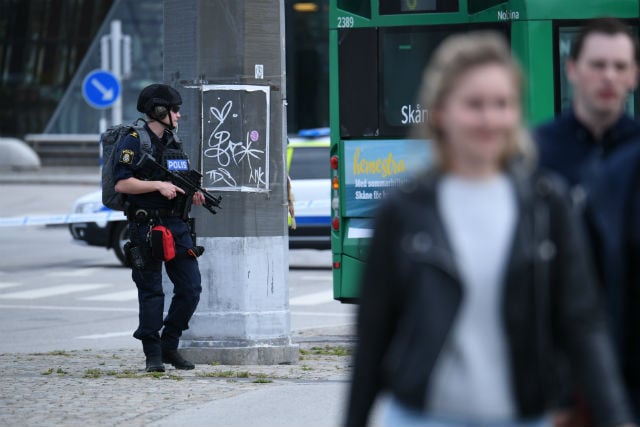 There is a large police presence all around the station. Photo: Johan Nilsson / TT
Police rushed to the station shortly after 10.10am in response to emergency calls about a man acting in a threatening manner.
“We dispatched a patrol and then a situation developed. The police officers shot at the man,” press spokesperson Evelina Olsson told the Kvällsposten newspaper.
Police investigators told a press conference in Malmö at 2pm that they had not yet confirmed the man's identity beyond what he himself had told officers. He was taken to hospital with gunshot wounds to his legs.
No one apart from the man making the threats was injured.
Swedish media quoted several witnesses as saying that the man, described as aged around 40, had thrown a sports bag on the ground and shouted in an accented English that he had a bomb.
A witness told the Sydsvenskan newspaper that the man had appeared disturbed or mentally ill.
“He was screaming at the top of his voice and threatening that he had a bomb,” the witness told the newspaper. “Some people were afraid, but others thought the same as me: 'this person is a nutter'.”
When no one reacted to the bag the man had thrown on the ground, he picked it up again and then threw it back to the floor again, the witness continued.
“When the police came, he shouted, “this is for real. I have a pistol,” the witness added. Shortly afterwards, he was shot.
Police evacuated the station, but lifted the cordons at around 3pm. Trains and buses are again running to and from the station, but knock-on delays are to be expected. A police officer next to a cordon outside the station. Photo: Johan Nilsson/TT
The police bomb squad detonated the two bags the man had been carrying at around 11.30am.
Commanding officer Per-Olof Söyseth said on Monday afternoon that they were still examining the contents of the bags, but believed they could rule out that they contained either weapons or explosive material.

He and his colleagues said that officers would step up their presence in central Malmö for the rest of the day, but that this was intended to make local residents feel safe and that they did not suspect any further attacks.
A member of the police's bomb ´squad arrives on the scene. Photo: Johan Nilsson/TT
A young man found with gunshot wounds in the Nya Bellevue area of Malmö just after 1pm is not linked to the incident at the central station, according to police.