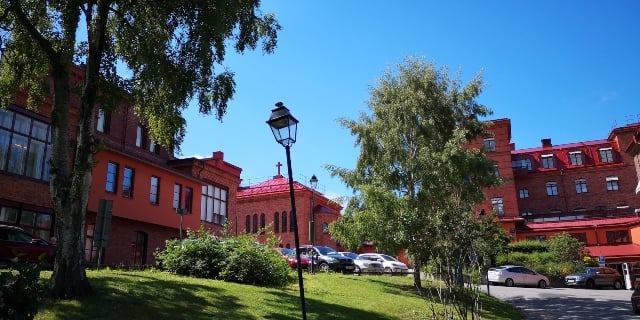 All too often, we push our own physical wellbeing to the back of the queue in part because coming to terms with a new country’s healthcare system sounds like just another difficult obstacle. This can be particularly true in Sweden, where both public and private healthcare solutions are on offer. It can be tempting to put off going to the doctor unless something truly goes awry – or until you simply return home if you’re here short-term – but in reality, new arrivals in Sweden have ample reason to get a health check.

After all, odds are you’ve been eating new foods and living a somewhat different lifestyle than you were ‘back home’. Visiting a Swedish doctor to ensure that you’ve got a clean bill of health or to recognise potential problems early is a good way to avoid a stressful situation later.

READ ALSO: How to make a health scare in Sweden less scary

That’s the line of thinking that led The Local to send a team member in for a general health check at Hälsocentralen at Sophiahemmet, an independently-run hospital in Stockholm that is home to 40 different care providers.

“When you go to a GP within the public system in the UK, it’s usually something you only do when something is wrong with you,” our team member Liv said. “But I just wanted to know that I was fit and well; I was really looking for that reassurance and that peace of mind.”

Although Liv is half-Swedish, she was born and raised in the UK and only moved here in 2016. Therefore it was important to her that the entire process surrounding her health assessment be carried out in English. Although Swedish doctors, like the population in general, are quite good at English, there’s no guarantee that the doctor on duty at your local vårdcentral (healthcare centre) will be able to explain everything to you properly and in sufficient detail if they have to do it in their secondary language. It’s also quite likely that every visit to the local vårdcentral will result in a consultation with a different doctor than the last time.

At Hälsocentralen at Sophiahemmet, neither of these are concerns. In Liv’s case, everything from the initial call to set up an appointment to the health check itself and the subsequent doctor’s consultation was in English. And the doctor she met with is the same one she will visit at each successive visit to Sophiahemmet.

“I was able to set up my health assessment for a few days after my call and they asked me right then if I wanted to set up my follow-up consultation with the doctor three days later, so we went ahead and did that too. It was all very easy,” Liv said.

Liv said she was put at ease from the second she arrived at Sophiahemmet, thanks to its calm, clean and quiet environment and the close and personal attention she received from staff. Her nurse, Inger Domäng, then ran Liv through a wide variety of tests to check her vision, heart rate, hearing, lung capacity, height, weight and body fat. Blood was also drawn in order to test for things like kidney function, vitamin B12, iron, liver, salt, blood sugar and blood fat.

“Throughout everything, the nurse thoroughly explained what she was doing, how the various tests worked and the reasoning behind them. The official results didn’t come until later when I met the doctor, but she did give me a lot of immediate positive feedback as we went along. That constant feedback was really reassuring and Inger was very calming and thorough,” Liv said.

All told, Liv’s health assessment took around 40 minutes. Because she was asked to fast before her appointment, the first order of business after meeting with the nurse was to take a sandwich and coffee, which is standard procedure at Sophiahemmet.

“While I was having my coffee, I struck up a conversation with a Swedish guy in his 50s who said he’d been coming to Sophiahemmet for around 30 years to get his annual check-up. He would just not stop raving about it,” she added.

Liv’s 30-minute consultation with Dr. Tomas Lindholm was at the same location three business days after her initial exam. The doctor went through the results of her tests, explaining everything as he went.

“The printout of the blood test results contained a lot of numbers that really didn’t mean much to me, but he explained everything in great detail, letting me know what everything meant and what the normal and healthy ranges were for the various metrics,” she said.

A quick physical examination followed and then Liv was sent on her way with a clean bill of health and Dr Lindholm’s recommendations for self-care.

“I really liked that when we were finished, he encouraged me to ask any questions or share any concerns I might have. In my case, I asked about a family members condition and he assured me that it wasn’t hereditary. He also gave me some good advice about how to ward off future health problems, including taking Vitamin D year-round, even during Sweden’s long summer days,” Liv said.

“A doctor visit shouldn’t be viewed as some sort of quick fix for when something is wrong with you, it should be a normal part of your life. If you take your car in for regular checks, why wouldn’t you take your body in? You’ve only got one body, after all, so you need to look after it,” she said.

While overwhelmed new arrivals or busy expat professionals might feel like they don’t have time to visit the doctor when they have new reason to suspect something is wrong, Liv countered that it is exactly this group that would benefit most from the kind of preventive health assessments available at Hälsocentralen at Sophiahemmet.

“Personally, I’d recommend getting checked out when you first get here or at least within the first year. That way you can feel relaxed and comfortable and get on with the other stuff that is important, like finding a job and learning the language,” she said.

For those pressed for time or who may not be able to make it to two appointments within a short span, there is the option of paying an additional amount to have your doctor consultation an hour after your tests, with free coffee and sandwiches while you wait, of course. Sophiahemmet’s health assessments start at 3,950 kronor and you can start the process of booking your appointment here.

This article was produced by The Local Creative Studio and sponsored by Sophiahemmet.