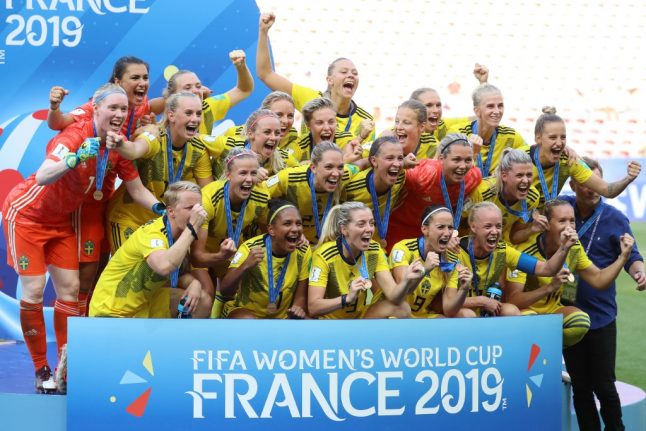 England were looking to claim the bronze medals for the second successive World Cup, but it was Peter Gerhardsson's side who finished third for the third time.

Kosovare Asllani gave Sweden an 11th-minute lead, before Jakobsson curled in an excellent second midway through the first half, and although Fran Kirby quickly pulled one back, England could not find an equaliser.

“I just think maybe it was a carry-on from the semi-final, the emotion,” said England manager Phil Neville.

“The two goals probably sparked us into life. After that, I thought it was the best we've played.”

It was a second defeat in under a week for Neville's Lionesses, after suffering their third straight major tournament semi-final loss when beaten 2-1 by reigning champions the United States on Tuesday.

The Americans will face the Netherlands in the final in Lyon on Sunday.

“Both teams looked shot, to be honest, almost on their knees,” added former Manchester United player Neville. “It's a really difficult game to get up for. It's a nonsense game.

“We came to this tournament to win it, not to finish third or fourth.”

England, whose men's team also lost the third-place play-off in last year's World Cup to Belgium, started slowly and were made to pay for slack defending as Asllani put Sweden in front.

Left-back Alex Greenwood was at fault, totally miskicking an attempted clearance straight to Asllani, who drilled a low finish into the net.

Neville's team were all over the place at the back and almost fell two goals down inside the quarter-hour when Jakobsson ran clear and fired against the post. The Montpellier winger was not to be denied in the 22nd minute, though, cutting inside and bending the ball past the despairing dive of England goalkeeper Carly Telford.

An end-to-end opening period continued as Kirby, back in the English starting line-up after coming on as a substitute against the Americans, clipped the ball in off the far post to score her first World Cup goal.

Ellen White thought she had equalised less than two minutes later with a tournament-leading seventh goal, but was denied by VAR review for handball.

White had also seen a goal ruled out by VAR in the loss to the USA.

The 30-year-old, level at the top of the scoring charts with US star Alex Morgan, almost equalised again on the stroke of half-time but shot straight at Swedish 'keeper Hedvig Lindahl.

England dominated the ball for much of the early stages of the second half, but Sweden, who lost to the Dutch in extra time in their semi-final, held firm and Telford had to be alert to keep out substitute Julia Zigiotti Olme's long-range drive.

Neville sent on Karen Carney with 16 minutes remaining for her final appearance before retirement, and the 31-year-old immediately helped England get onto the front foot.

A goalmouth scramble saw both White and Kirby go close after Carney's cutback, before Jakobsson's weak attempt to put the game to bed on the counter-attack was held by Telford.

England had a gilt-edged chance to extend the play-off in the 89th minute as Lindahl failed to hold a corner, but Lucy Bronze's well-struck volley was brilliantly headed off the line by Nilla Fischer.